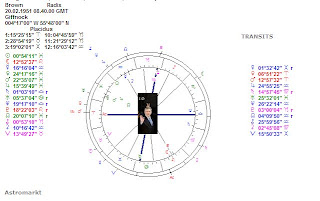 Gordon Brown knows how to survive a political crisis. At least, that is what he did in September 2008 and before. However, his natal chart is difficult and so are his transits and progressions. Here you read about the present situation, the situation in 2010 (Elections) and the resemblance with the charts of George W. Bush, Mussolini and ...Rosemarie Fritzl.

SCANDAL
Now there is a financial scandal and I wonder what he will do to escape this. It seems that Gordon Brown paid his brother Andrew (...) 6.500 pounds for the use of a cleaner and for a plumbing bill. That was when he was a member of parliament. The Telegraph mentions 13 ministers who used the parliamentary expenses system in a way that forces the Prime Minister to defend the system and his fellow politicians.

SATURN SQUARE MIDHEAVEN
His government may not be very stable, but he remains thePM always. His natal chart shows ambition and the possibility of decay and fall (at least in the public eye).
He has a 'calling' Saturn square Midheaven, just like in the chart of George W. Bush (who has Saturn square Midheaven, too). I think Saturn square Midheaven tells us that the career involves management (and/or government) and yes, politicians sometimes have to step back. With Saturn not making aspects in sign or orb 5 degrees (only this square with MC) one should expect rise and fall at any kind of level. But perhaps 6.500 pounds is not enough 'level'. Interesting, by the way, how Uranus opposition his Midheaven causes upheavel every now and then.

SUN INCONJUNCT SATURN
There is an aspect in Gordon Brown's chart that may look familiar to those who read all posts of this blog. Gordon Brown has Sun inconjunct Saturn in his natal chart, just like Rosemarie Fritzl. So I will repeat the quote from Cafe Astrology here: 'It is easy for you to take on responsibilities that aren't yours while ignoring ones that are.'
Rosemarie Fritzl lost her position and 'status'. Benito Mussolini also had Sun inconjunct Saturn. Gordon Brown's chart shows a certain risk to end his career on the short end.

ELECTIONS WITH TRANSIT PLUTO ON MIDHEAVEN
The politicians won't drop him, but there will be elections before June 2010. That is when transit Pluto hits his Midheaven. His progressed Midheaven is about to conjunct his Sun and to be inconjunct Saturn, hitting the inconjunction of the natal chart. That makes his position hard, compared to that in September 2008. He may be blamed by the public. Often Pluto complicates things and perhaps he will have a difficult time in spring 2010. But Pluto also often means 'come back', however difficult. Should he have to return to parliament and step back later, with MC inconjunct Saturn? With Uranus on the MC of his solar return for 2010, the results may be surprising. It was a surprise that he became PM, too.

PS The inconjunction may also refer to the fact that there is a health issue (he has only one eye).

It is PM (Prime Minister:)