Charts of Kiefer and Rachel Sutherland 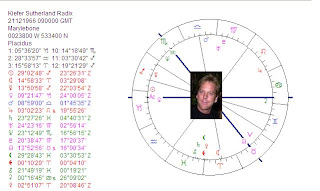 Kiefer Sutherland is an actor and a director with a twin sister working in the same field. With transit Pluto inconjunct Jupiter (the disproportionate price to pay for success) he is in the news today. There is an explanation for his success as an actor and for his arrests.

ARTIST
On my blog Art&Astrology I mention the astrological pattern of artistic talent in the charts of artists, musicians, writers and actors. This pattern (of Moon, Venus, Neptune, the related signs and Midheaven) is visible in his chart (December 21, 1966, 9 a.m. in Marylebone UK), like this:

1. Neptune is the first outer planet rising before his Sun
2. Venus is conjunct the Ascendant
3. The Moon is on a crucial spot (down under in the chart)
4. Neptune is square Sun/Moon
5. Moon is inconjunct Midheaven, Venus is sextile Midheaven
6. Mercury is 67.5 degrees from Sun/Moon (for being communicative)
7. The Sun is square Aries Point (for directing and being a star)
8. He has a cool Venus in Capricorn, like other male movie stars have. See the post about male attraction...

Notice that the prominent Moon and Venus ('sense of art') are related to the career (Midheaven) and he is in heart and soul (Sun/Moon) an artist.

JAIL
He spent time in jail in December 2007/January 2008 with transit Jupiter and Pluto conjunct Sun (and Uranus trine Midheaven). This was for driving under influence. Today he has transit Pluto inconjunct Jupiter. He is in the news because of another arrest. Someone was rude against his female companion and this person was head-butted by him.
There is an explanation for that, too.

1. Mars is elevated (on top of the chart) in Libra.
Mars is in Libra often leads to aggression (being with others provokes aggression). The position of Mars on top of the chart could be read like this: being above all an activist, entrepreneur, worker or ... fighter.

2. Saturn is opposition Uranus and Pluto
This is introducing the theme of restricted liberty and sudden arrest. It is a long term aspect combination, but in this individual's chart it is an important one. Saturn rules his Ascendant and is ruler 1. Pluto rules his Midheaven (position, reputation). Uranus rules his progressed Sun and is square his natal Sun.

3. Mars is semi square Neptune (for the use or abuse of alcohol and drugs AND for work related to the field of medications, fantasy, or beliefs...with the idea that the job is not fully satisfactory).

4. Mars is quindecile Saturn and 15 degrees from Uranus, thus connecting the combination of sudden restricted freedom.

5. Mars is sesquisquare Sun/Moon
He is a person who wants to act or react immediately.

6. Venus is tightly square Mars
That is the aspect of passion!

7. Mars is square his Ascendant (for an assertive approach).

SISTER
Kiefer Sutherland has a twin sister (Rachel) who works as post-production supervisor in the world of the movies. See her picture here...http://www.getback.com/gallery/the-other-half-of-famous-twins/2986770/1
She was born 3 minutes later. That changes the degrees of the Moon, Ascendant and Midheaven, places Venus closer to the Ascendant, alters some of the midpoint combinations and...the big difference is the gender. Mars is working harder in the charts of males (because of the amount of male hormones).

This is her chart, her brother's positions are on the outside of the circle. 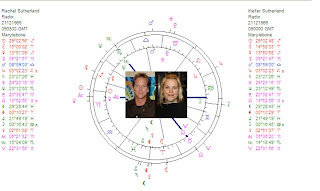