The success of Hillary Clinton 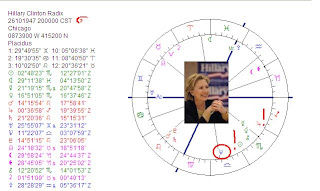 Hillary Clinton is doing a great job in the Obama-government. Her progressed chart will be helping her for the next 6 months. There are two progressed prosperous aspects:
1. Progressed Jupiter is trine her Mars.
2. In or around February 2011 Jupiter will trine Pluto in her progressed chart. Those are combinations for success.

It is a pity that the correct birth time of Hillary Clinton has not been set yet. It could be the 20 p.m. or the 8 a.m., but nobody really knows for sure. What is certain is that her Sun is in Scorpio (without Ptolemaic aspects in sign) with Neptune rising before the Sun. That makes the 26th October 1947 a perfect day for a leading figure to be born.

CALLING SUN AND JUPITER, NEPTUNE RISING BEFORE THE SUN
A Sun without Ptolemaic aspects reflects 'drawing attention at any kind of level', performing as an artist or being in the centre of attention as a leader. As Hillary Clinton has 60% of her placements in fixed signs, she has 'endurance' and a strong will. Another important planet in her chart is Jupiter. Without Ptolemaic aspects, Jupiter is 'calling', just like the Sun. The importance of Sun and Jupiter contributes to self confidence and successes. And the combination of the prominent Sun, Jupiter and Neptune reflects the fact that she has a lot of devoted fans and followers.