Demjanjuk and Uranus rising before the Sun 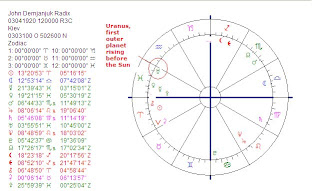 John Demjanjuk has been found fit enough to face the judge and to remain in a German prison today. That shows us that there is always the chance of the disadvantage of the advantage. The cynical fact is that Uranus is the first outer planet rising in his chart. I have several examples of the beneficial effect of that position of Uranus in the charts of very old persons. Pope Benedict has it (and they thought that he would be an 'interim' Pope:).

John Demjanjuk is 89 years old. Had he died 10 years ago, than he would not have been forced to spend the last years of his life in another country, away from his family. He is in Germany because German authorities issued an arrest warrant. He will be on trial for 29,000 counts of murder (most of them Dutch jews) as a guard at the Sobibor death camp from March to September 1943 (source CNN).

BTW In his progressed chart Venus is conjunct Sun. In normal circumstances that would be a pleasure. At his age and given the situation the 'grace' and 'peace' of Venus could be eternal rest, being pardonned because of his age or any other effect that makes life better. Unless the prison in Germany is already better than in the USA...in which case he might live even longer.