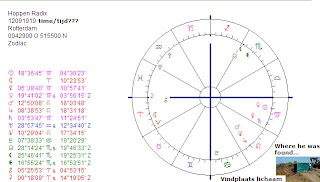 Few persons face the end of life with transit Saturn at young age. Exception: the young man who killed 7 persons and himself on Queen's Day in The Netherlands. He had transit Saturn opposition Sun. Saturn's transits sometimes pass bye and leave no special marks. But when a person is ill, old or in difficult circumstances this transit certainly doesn't help to make life easier. And that is an understatement. Saturn ends a period in life. And in some cases, life itself. This post is about a nasty example in WWII. I will try to find examples of how Saturn was a benefit, later.

In times or circumstances of war the chance to die young is greater than normal. A sad example of the effect of transit Saturn square natal Sun is the painful story of Pieter Hoppen, a 23 year old victim of a Dutch resistance group during World War II. They had 'convicted' him because of the idea that he was a traitor. He was not, they were deadly mistaken. An 86 year old member of the resistance - Gerrit Gunnink - revealed the story and the place where the body had been burried after Pieter had been shot in the head 7 times.

Pieter Hoppen was born September 12, 1919 in Rotterdam (certificate shown in the documentary that I saw about the case). He died mid 1943 in the rural eastern part of the country. Transit Saturn was square his Sun mid 1943. Saturn rises before his natal Sun. That makes Saturn important in his chart. Without an hour of birth we don't know about other indications (transits or progressions) that lead to this extreme example of bad luck with Saturn's transit in Gemini, square his Virgo Sun.

It seems that the difference in the way of communicating between the city boy and the rural men of the restistance aroused suspicion. He also had the bad luck that a German patrol followed his visit to a farm. Mr. Gunnink recently had to face the fact that his group made a mistake and that he contributed to the death of an innocent person. That is hard to handle, but he also felt relief, because now the family finally knows what happened to míssing Pieter Hoppen.