On Sternwelten (17 november 2008)I finally found the birth day of Rosemarie Fritzl, the wife of Josef Fritzl and the mother of Elisabeth Fritzl: September 23, 1939. I have always wondered about the contents of her chart. Now that I have a date of birth, this enables me to have a look at the match between her and her husband. My conclusion: there is no match but yes, they shared a life and astrological aspects. They shared a desire for earning money (Venus-Jupiter-Pluto) and they shared deadly danger (Mars-Saturn-Pluto).

Here are the charts of the days of birth (for noon) of Rosemarie, Elisabeth and Josef Fritzl. 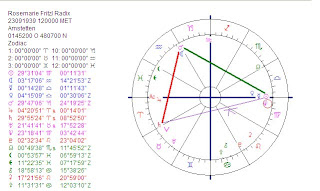 ROSEMARIE
I choose not to try to read the chart of Rosemarie Fritzl, without knowing her hour of birth. But, allow me to quote Cafe Astrology about Sun inconjunct Saturn: 'It is easy for you to take on responsibilities that aren't yours while ignoring ones that are.' See: http://www.cafeastrology.com/articles/inconjunctaspects.html

I think this perfectly reflects the upbringing of the children of her daughter and not having protected her daughter against her abusive husband (and she knew that he was convicted for rape).

Rosemarie educated 10 children: 7 of her own, 3 of her daughter. In 1992 the first foster child was dropped on her doorstep and that was with progressed Sun opposition Uranus: someone else suddenly changed her life. In an interview in 2009 she referred to her sad financial position since the arrest of her husband. She had to give up on 7 houses and a lot of money. Venus-Pluto is the financial axis. Transit Pluto was conjunct progressed Venus when her daughter stepped out of her prison. Progressed Venus is getting closer and closer to Pluto now.

BTW Mars square Saturn is one of the aspects that indicate possible divorce in the chart of females. 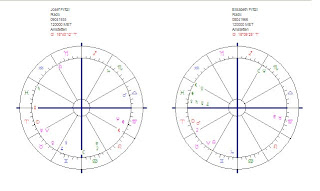 The reading of the charts of Elisabeth and Josef is in an earlier post that you find here.

WHAT THEY SHARE...
They share (a combination of) aspects. Josef and Rosemarie share Venus opposition Jupiter: they love to travel, marriage is 'for better'. Both have Venus in aspect with Jupiter and Pluto for earning a lot of money. They were rather wealthy together, having 7 houses.

SHARING HARD MEASURES
The chart of Fritzl is obviously that of an abusive person or should I say: a person who has the potential to be abusive. Mars, Saturn and Pluto form the combination of severe and hard measures, unnatural death and danger of death. This combination is in the charts of Josef, Rosemarie and Elisabeth.

The Mars-Saturn-Pluto connection reflects the fact that they all had part in the dangerous use and abuse of violence, as a victim or as an abuser. And the Mars and Pluto of Josef (use of violence) are the planets connecting their charts!
- Josef's Pluto is square Elisabeth's Mars. His Saturn is semi square her Mars.
- Josef’s Mars is quindecile Rosemarie's Saturn and quintile her Pluto.

ELISABETH
Elisabeth's life changed in a positive way in 2008 and so did her chart. Her progressed Sun changed sign and progressed Venus joined her natal Sun to reflect that. But these days transit Saturn is inconjunct HER Sun since her father's trial and conjunct her Uranus. This is the combination of restricted freedom (Saturn-Uranus-Sun). She is still in a proces of transformation. Her progressed Sun is moving into Gemini, to another lifestyle and another way of living, but not stable yet.

RELATED ASTROLOGICAL INFO ON MY SITE ASTROMARKT.NET:
About Mars and Pluto
About sharing aspects in a relationship
About matching signs, see this blog....
About inconjunctions...