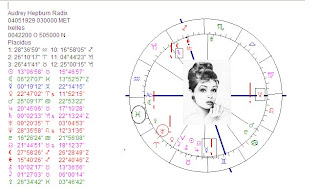 1. Neptune
Neptune is angular, on the Descendant and Neptune doesn't make Ptolemaic aspects ins sign or orb 5 degrees. That makes the planet of the actor, drugs, smoke, mist, dreams, illusions, arts and sensitivity very important so that the issue of addiction has a big chance to be important, too.

2. The Moon
Her Moon is in Pisces. A Pisces Moon symbolizes the need to for romance and hiding from the real world into the world of dreams, fantasy, visions and arts. Her Moon does not make Ptolemaic aspects in sign or orb 5 degrees. So there is a need to 'run' and needs are important at any kind of level!

3. Her Sun is square the midpoint Mars/Neptune and Neptune is semi sesqui square Sun/Mars. The use or abuse of drugs, medications, alcohol CAN be indicated by Mars-Neptune combiations.

4. Ceres
Uranus oriental (rising before the Sun) frequent in the charts of those who live extremely long. But...Audrey Hepburn died at age 63. More and more I come to consider Ceres as important as I find Pluto. Ceres is the first to rise before her Sun. Ceres symbolizes nutrition (food, drinks and whatever you take, comsumption).