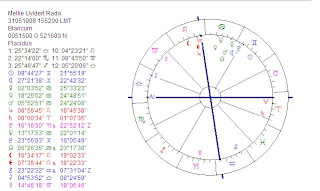 With transit Jupiter trine and Uranus inconjunct Ascendant, a combination of relief*), Mellie Uyldert passed away. There was also a transit of Mars inconjunct progressed Sun and lately transit Saturn crossed her 100 year old Sun. Last year she broke a hip with transit Sautrn inconjunct Saturn. With the death of Mellie Uyldert an impressiven and controversial person has gone...

A quick reading of the chart of Mellie Uyldert tells us that she was first of all conservative (with Saturn rising before the Sun), that she had a strong focus on a subject (7 quindeciles) and that she was above all a person who wanted to guide others (Jupiter conjunct Midheaven). The amount of placements in her 9th house reflects the amount of publications about different subjects (herbs, stones, poetry and about astrology. In this post I will focus on that...

She has Sun sextile Jupiter and biquintile Uranus in her natal chart. The combination of Sun-Jupiter-Uranus is frequent in the charts of astrologers.
Uranus is square the Ascendant. That is of influence in the way she presented herself. People found her peculiar and excentric (and of course, astrologers ARE rather excentric). But her ideas and publications often caused upheavel because of the (racial) theories, for example. Uranus is oppostion the stellium of the ninth house...
The midpoint Jupiter/Uranus is connected with Mars and Nodes. The combination of Sun and Midheaven with Neptune/Pluto refers to the 'mystic' or 'paranormal' field of her activities.