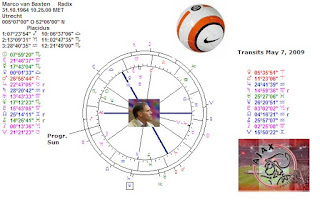 Marco van Basten is no longer the coach of Ajax. There are a lot of analyses in the newspapers. One of the comments about Marco van Basten is that he failed to communicate with the members of the team. Another one is that his decisions were not always understandable and never explained. One of the members of the team says that he was always at distance and did not show emotions. There is an explanation for that attitude in his natal chart. This post is about:
- the influence of Saturn and Virgo on the way that he communicates,
- the conjunction of Mercury and Neptune on the way his ideas are being communicated and understood
- and about the inconjunctions with Mars (transit) and Jupiter (progression), reflecting the loss of his job.

COMMUNICATING WITH SATURN AND VIRGO
The distant communications are reflected by the very important Saturn in the third equal house, on cusp 3 of the Placidus house, by Mercury in Scorpio conjunct Neptune and by the Moon in Virgo.

SATURN IN 3RD HOUSE
Saturn is the symbol of distance and of the official. Saturn is always restricting, limiting and raising barriers. Marco van Basten’s Saturn is important. Saturn is sesquisquare the midpoint Sun/Moon: he is in heart and soul serious, a businessman, the manager, ambitious. Saturn is half semi square the midpoint Ascendant/Midheaven, too. This means that he is 'all in all' cool, ambitious and business. Van Basten’s Saturn is in the 3rd house of communications. So Saturn will limit communications to what is 'necessary' to fulfil the job.

MOON IN VIRGO
The Moon in his chart is not positioned in the most expressive sign for emotions. The Moon in Virgo is a cool moon, a moon for 'understatements' and modest behaviour. But Van Basten is 'the man in charge'.

MERCURY CONJUNCT NEPTUNE
Mercury conjunct Neptune symbolizes misunderstandings. This aspect reflects how his decisions were ‘understood’. I have written about that aspect before in the post about Rudolf Steiner:
.
“MERCURY CONJUNCT NEPTUNE
The final dispositor of the MC, Neptune, is conjunct Mercury. Cafe Astrology describes the conjunction of Mercury and Neptune. It is the aspect that joins facts and fantasy. Also read my blog, where I mention the aspect Mercury-Neptune:
"When you have to invent stories because you are an author, this aspect can be a blessing, but in real life it is not easy. For an example, see the charts of Gerard and Guillaume Depardieu. BTW, Brad Pitt (actor) has Mercury sextile Neptune, tightly. More about Mercury-Neptune on this blog Astropost: about the Friedman case." (i.e. Mercury inconjunct Pluto)”

Then he told the team that he left, shook hands and disappeared. Short, cool and without emotions.

JUPITER’S INCONJUNCT
Jupiter was on his side in the summer of 2008, read that post...

In March 2009 the progressed Sun was inconjunct Jupiter. That was when the first polls appeared with results like 'he'd better play football instead'. And that was shortly after Ajax won an important match (from FC Utrecht with 2-0). So he had success (Jupiter), but...(inconjunction)...

*) Recently Elsa wrote about the influence of the present transit of Saturn in Virgo:
http://www.astrodispatch.com/2009/05/06/saturn-in-virgo-and-the-struggle-to-communicate/