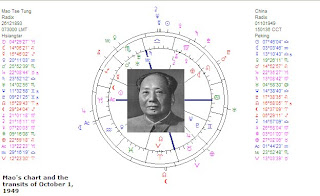 One of the founders of the People’s Republic of China and the first President of the nation was Mao Tse Tung. He was born December 26 1893 at 7h30 a.m. in Hsiangtar or Siang Tan. The hour of birth has a C-rating only, according to Astrodatabank, so I will pay more attention to the planets.

The first thing that I notice is that the Sun doesn’t make major aspects in sign or orb 5 degrees. That is ‘peregrine’ or ‘calling’ Sun and it means that he will draw attention at any possible level. This prominent Sun is quintile Saturn (for a creative way to be in charge). He was also born with the Sun in Capricorn and a Leo Moon in a tight square with Uranus. The combination of Capricorn-Leo is not rare in politics or management, neither is the combination of the dispositors of these signs (Sun-Saturn). It involves ambition to be a leader or manager.

The second thing is that the Sun/Moon midpoint for this hour is in aspect with both Saturn and Pluto. It is the combination of the ‘die hard’, the politician who is not afraid of hard confrontations. He is being motivated by ambition and power. More about Saturn and Pluto….

Mars is rising before his prominent Sun. This is reflecting the activist and fighter, a soldier, entrepeneur or promotor.

Conclusion: this is the chart of a die hard political fighter and leader. But where in this chart is the adored God-like person who improved the lives of many and was hated, too, and responsible for the death of millions? I think that progressions and transits on crucial moments in time offered the opportunity to become that person. The chart of Mao (and any other chart) should be read given the conditions and situation at the time and place in history.

- January 1935: Mao becomes the political leader, the chairman of the Chinese Communist Party. That is with Progressed Midheaven opposition Pluto (a challenging position, profit, power). At the same time progressed Jupiter returned to the natal position (successful progress) and it was just after transit Pluto square progressed Saturn (the ‘die hard’ was born).

- In 1942 he married his third wife, Jiang Qing. That was in the year of progressed Sun trine Saturn while the Ascendant afflicted both Saturn and Pluto. He introduced his management practices. Party leaders had to criticize themselves the hard way (so called rectification campaign).

- In 1944 he became the states leader according to the Communist party, but only after a civil war (on October 1, 1949) he became President of the People’s Republic of China. That day the transiting sun was sesqui square progressed and natal Jupiter and trine progressed Pluto (the combination for success). Transit Uranus was opposition Mao’s Sun (life changing) and Saturn was trine the Ascendant (he was respected and made name).

- In order to secure his powerful position he organized the so called Cultural Revolution in 1966. In 1966 there was a conjunction of Uranus and Pluto. This revolutionary aspect was exactly square the progressed Sun of Mao Zedong! Maybe it meant a radical change in HIS life. But it certainly meant a radial change for the people of China.*)

Above you see the natal chart of Mao Tse Tung and the transits on the day of the foundation of the People’s Republic of China. More about China in an earlier post…http://astropost.blogspot.com/2009/09/chart-of-china-60-years-old.html

*) This is a good example of the influence of the leaders' chart for his followers.
His transit of dramatic change caused dramatic upheavel, and a lot of arrests and (ruined) lives.