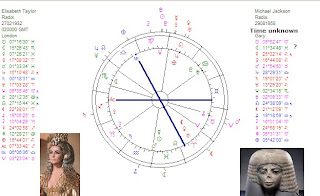 Elisabeth Taylor has transits of Mars and Saturn with (progressed and natal) Midheaven today. She was one of the guest on the funeral of Michael Jackson. Mars-Saturn is the combination of death, of separation (Saturn) from a man (Mars).

She was fond of Michael Jackson. Their Sunsigns didn't match (and of course they didn't have to live together 'as one'), but their Moonsings did and his Moon in Pisces may even have been close to her Sun and Mercury in Pisces.

VENUS and URANUS
Elisabeth Taylor and Michael Jackson both have/had Venus conjunct Uranus, the aspect of the firework in the rollercoaster. That is the aspect for love of adventure and excitement, of feeling for the rhythm and of artistic aspirations. Both have/had the kind of love life that produces news and excites the readers. Sharing the same aspect creates a spiritual bond. More about sharing aspects on my site Astromarkt...