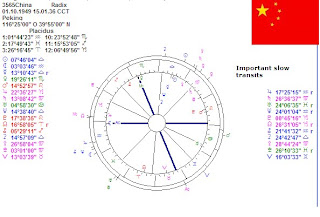 The People's Republic of China is 60 years old. Time to have a look at the natal chart and transits. The Moon happens to be conjunct mine. I have never been there, but perhaps I would feel more at home than I can imagine. Maybe it is a good idea to go there and see how it feels:)...

NAME
China's name contains the word 'people'. The Moon - symbol of the people - is conjunct the Ascendant (name) and in Aquarius (sign for a republic, opposition the royal Leo). I wonder if anyone manipulated the time of this chart because of this, but if not: it is a brilliant astrological statement.

Saturn was rising before the Sun, without major aspects and in Virgo. This is reflecting the conservative and restrictive orientation. Mercury is semi sextile Saturn and so is Mars. In fact,Saturn is positioned on the midpoint of Mercury and Mars, restricting (Saturn) discussions (Mercury-Mars). But the prominence of Saturn might also reflect a more fysical restriction: the famous Chinese wall, here on a Nasa picture.

WOMEN
Venus is conjunct Midheaven. It was the end of war: peace! (Venus symbolizes peace). Venus AND the Moon are reflecting feminine qualities. With the foundation of the People's Republic China started one of the first nations in the world with equality for women. Political struggle (Mars-Pluto conjunction) often led (and perhaps still leads) to suppression, however. For more about that, see Amnesty International...

BIRTHDAY
The solar return (or birthday) chart has the Moon in Aquarius square Midheaven. That means that there will be a desire for change. The Ascendant of the Solar Return is inconjunct the natal Moon in Aquarius and lately the progressed Ascendant was square natal Moon. That is again a sign of wanted change. Also, transit Pluto will be square natal Sun in a few years time. There might be political difficulties (and reforms), if a country's natal chart works as a person's natal chart does. In that cse, there will be a period of transformation ahead. But didn't we already know that? There might be a visible effect of the economical crisis within 2 years and that may force the Republic to make vital changes in order to get back on trail.

Here is the birthday chart: 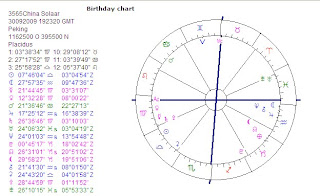