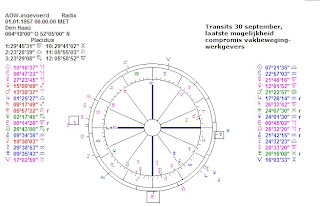 This chart is the chart of the implementation of a Dutch law (the AOW, the general old age law in free translation:) on January 1,1957. This law granted those who were over 65 years old, working or not, rich or poor, an income and ended the dependance of the elderly. This law is subject to discussion these days. Today is the last day that unions and employers have to come up with an idea of how to change this law, read: how to make people work longer. The government wants that people work till 67, employers say that it should be 67 (but starting in 2025) and the unions want flexibility.

The law's chart is a nice chart and it fits. Moon in Capricorn (caring for the old ones) and Jupiter on the Ascendant for support. But now transits and progressions of Saturn threaten to end the nature of the law.

CHANGES, LIMITATIONS
Last month the progressed Sun was inconjunct Uranus and within two years there will be another inconjunction with Uranus (the natal position). It means changes with a loss...

When the law is ripe enough to get a nice 58+ arrangement (in 2015) the progressed Sun will be square Saturn and in 2020 (when the law is 63) progressed Sun is square progressed Saturn. The law is getting OLD! And on the first of January 2013 Saturn is on the law's Ascendant. Should that be A date to start reducing the benefits of this law?

Anyway, Saturn, the planet of aging and limitations is 'hitting' the chart of this law for the elderly and might be marking the end of a period or the end of the law itself.

Astrology works for laws, too:)