Roman Polanski (born August 18, 1933 at 10:30 MET = 9:30 GMT in Paris) has been arrested in Switzerland for a 1970 rape charge when he was on his way to the Zurich film festival (for a tribute). What does his chart say about the timing of this arrest, the artist in the chart of Polanski, his successes, how his works correspond with his experiences, and the possible explanation for his behavior (towards women)? And what could be the effect of the unaspected Mercury, Saturn and Neptune?

1. WHY NOW?
There are very telling transits informing us about a scandall, Solar Arcs announcing the issue of limited freedom and there is a progressive Sun square Saturn while in 1970 transit Saturn was square his Sun: the mistake is being highlighted again. 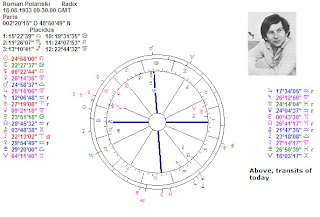 Watch his transits (I used a maximum of 1 degree orb:

What does it mean?

Your reputation is being 'hit' and 'hurt' with Mars on Midheaven.
There will be a disproportional and unbalancing upheaval regarding your life style and activities.
You will be seen in a negative light due to other person’s activities
And your life will easily change completely

The combination of Uranus and Neptune, both inconjunct the Sun, is a disaster for a celebrity. It shows that there is a negative (Neptune) press (Uranus).

Of course with Sun, Moon, Venus and Mars in aspect with Uranus and Pluto in the natal chart of Roman Polanski, there was a high risk from the start that dramatic changes would occur. Arrests also dramatically change a life style, that is why Uranus-Pluto combinations are frequent in case of an arrest.

b. SOLAR ARCS
The Solar Arcs of Roman Polanski also tell an important tale. They announce the issue of restricted freedom. 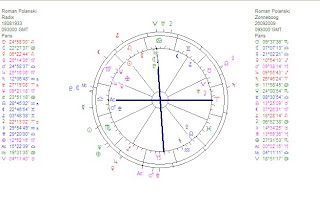 SA Uranus inconjunct Saturn and SA Saturn conjunct Uranus open an opportunity for the natal minor aspect between Saturn and Uranus (75 degrees) to ‘start working’. The combination of Saturn and Uranus is the combination of the issue of limited freedom and the resistance against it. Polanski escaped Warshaw and he managed to stay out of jail for more than 30 years the same way. Click the label below to see more examples.

c. TRANSIT SATURN SQUARE SUN AND SUN SQUARE PROGRESSED SATURN
What comes around goes around...In 1970 transit Saturn was square Polanski's natal Sun and in his SR-chart the Sun was square Saturn. Next February progressed Sun will be square progressed Saturn. Saturn is the symbol of mistakes and guilt and of the disadvantages of a life style. Often when an aspect combination of the past is being repeated, the present event has a link with the past. The mistake of 1970 is being highlighted again...

II. THE ARTIST
The pattern of artistic talent*) in the chart of Roman Polanski is made like this:

III. SUCCESS and PROTECTION
The Sun is conjunct the midpoint of Moon and Venus and of Moon and Jupiter. Also Jupiter is conjunct Sun/Mars. This huge amount of indications for success and protection helped him to survive World War II and brought him successes. Jupiter, the planet of protection and of 'abroad', is half semi square AC/MC and semi square Sun/Moon. He managed to get out of the hands of justice by living in France. The position of Jupiter in the 12th house has been seen more often in the charts of those who find asylum in another country (like Kaiser Wilhelm, for example). Polanski originated in Poland and lived abroad since

IV. YOUTH AND WORKS
The Moon is in an 'oriental' position, rising before the Sun and conjunct Pluto, close to Midheaven. Roman Polanski grew up in terrible circumstances as a Jewish fugitive during the war. His father survived the war but didn't want to see his son any more. His family members already noticed uncommon, brutal behavior. Pluto conjunct Moon intensifies needs, I read. Who knows what really happened and how that felt? The Moon-Pluto conjunction simply reflects dramatic experiences or memories and intense reactions, but also shows us strong and intense needs (perhaps as a result).

Pluto's afflictions turn every Mars-activity into a 'must'. Mars square Pluto and opposition Uranus indicates the possibility of impulsive acts of violence. Moon, Mars, Uranus and Pluto were aspected by the progressed Midheaven in his early years in Poland when most of his family was murdered and his position was dangerous. These experiences of course affected him. It was a tense and stressful period. Roman Polanski's dramatic experiences (Moon - Pluto) were of crucial importance for his later position in life, too. His work always has a strong psychological effect. Perhaps psychological problems were 'exposed' and 'controlled' by producing and directing psychological thrillers, perhaps he could make them so intensely scary because he experienced fear and danger when he was very young.

V. POLANSKI AND THE WOMEN
Venus inconjunct Uranus can have the effect of disproportionate adventures or incidents with females, due to 'getting out of balance' when falling in love. About the effect of Venus-Uranus, see an earlier post and/or go to Astromarkt.

Mars square Pluto is a difficult aspect reflecting the use or abuse of force, influence and violence (or having to defend yourself against it). On Astromarkt there is more about this aspect. The combination Venus sextile Pluto and Pluto square Mars shows us intense passion and the possibility of getting into trouble because of that (as a victim or abuser).

A prominent combination of the three planets can point at mental illnesses, but they also reflect ambition (Saturn), fantasy (Neptune) and communication talent (Mercury), making a business (Saturn) of telling tales (Mercury-Neptune). Unfortunately, a prominent combination of Mercury, Saturn and Neptune also might mean that something is wrong with understanding messages (wrong interpretation, given or received). Well, that is what a movie maker does when he is scaring you by telling you a tale about someting that never happened...

*) More examples of the pattern of artistic talent on Art-astrology.blogspot.com