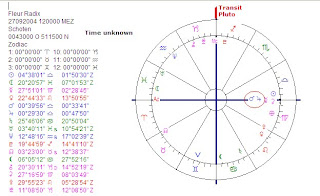 A Belgian little girl named Fleur had her fifth birthday last Sunday. In the night after her birthday she woke up because the roof was falling down. There was a fire. She took her toy and blanket and went to the bedroom of her parents to wake them up. Now she is a five year old hero!

It is nice to see that on her day of birth Mars was conjunct Jupiter. Mars and Jupiter were rising before the Sun, together. They were 'oriental'. That is reflecting successful action! On her birthday transit Pluto was square Mars-Jupiter. That is how you get a tremendous combination for success (Mars-Jupiter-Pluto). And for danger, that too!

See the picture and read the story (in Dutch, translate on Google): http://www.gva.be/antwerpen/schoten