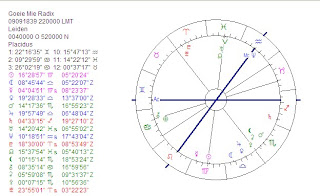 Two years ago I wrote an article about someone born on September 9. Her name was Good Mie. Here it is in short.

Good Mie was a female serial killer who had the habit to pay for the insurance of her later victims, just to collect the money when they died. That was soon after they became ill due to poison that she could easily obtain. She was named 'Good' because she took such good care of the persons that she had poisoned... She was saving money for her old age...

This is the chart of a restricted and limited person. We can see that by ruler 1 retrogading AND afflicted by Saturn. She has intense desires (Venus and Pluto) and a strategic mind (Mercury-Saturn-Pluto). She also has a reputation of an idealistic person (Neptune on MC) and looks younger than she is (no grey hair at all at age 44 and given her circumstances: Gemini ascendant). She used to be loved (Venus conjunct Jupiter) and she was creative (a lot of quintiles). She uses force if needed (Mars and Pluto in MR and Mars in Scorpio). And she was not exactly in the circumstances to NOT use force.

She was poor all of her life, lost most of her children, had an alcoholic father (Neptune on the MC?) and often she did not have a home because her parents did not pay the rent and were kicked out of the house. She had a very rough and hard life and she had Moon in Libra, Venus in Libra conjunct Jupiter on the midpoint Ascendant/MC: she must have longed for a pleasant family environment and a well decorated house and maybe was saving for old age (they are all 3 in the 4th house of old age). And then you see what happened to her: hard labour! Saturn is in the 6th and squaring her ruler 1.
In the article I concluded:


So it is the mixture of character (a desire for comfort and joy -reflected by the opposition between Venus and Pluto-), experiences (awful background, children dying, a trauma perhaps) circumstances (poverty, opportunity for buying arsenic and no control after death) and time (bad situation, many people dying) that made her do it and that allowed her to do it.


More about Mars and Pluto on Astromarkt...