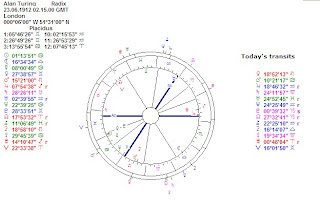 Yesterday I mentioned the name of Alan Turing in the post about Dutroux, related to the combination of discretion and dangerous secrets (Neptune/Pluto). Today I read that there will be an official appology for the way the authorities prosecuted Alan Turing after WWII for being gay, in spite of his tremendous value in the battle against Nazi-Germany. In his natal chart Sun is conjunct Pluto (out of sign). These days transit Pluto is opposition his natal Sun. For more: I also have posted comments on the original post about his chart, that you can find on this blog, too, with links to the news about Turing:
http://astropost.blogspot.com/2009/06/alan-turing-chart-of-genius.html

For another rehab (of Martin Luther, the reformer), see my post of March 2008