Ban the bulb; the chart of Edison

In Europe the light bulb has been banned. People are supposed to use Led light or CFL instead. The 100 Watt bulb was the first to be banned, yesterday. Should it be just coincidence that transit Pluto (symbol of transformation and change) was inconjunct the progressed Sun of the inventor? The inconjunction is the symbol of lost and loosing balance. The bright invention of the 19th century doesn't please the authorities anymore.

Thomas A. Edison is the official inventor of the light bulb. The first time that he managed to let the light glow was on October 21, 1879. On New Years Eve 1879 the public walking around Menlo Park saw dozens of light bulbs burning and soon after that his invention became a commercial success. 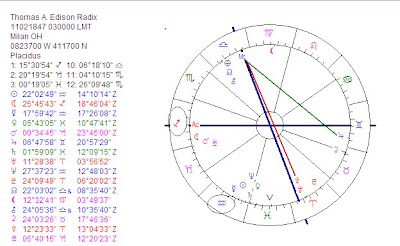 It is said that he was born around 3 a.m. In the year 1879 progressed Jupiter ruler 1 was inconjunct progressed Midheaven to illustrate an extraordinary success, but....The 'but' is that there were 2 other persons (Heinrich Göbel and Joseph Swan) who invented the light bulb a few months before he did. Apparently it was light bulb time! Uranus (symbol of electricity) was in the first degrees of Virgo, opposition Jupiter in Pisces, in 1879. The combination of Jupiter and Uranus is the combination of the invention and the inventor and of someone with an open mind who can see possibities beyond what is already here and now, able to make a positive change. He was the owner of a laboratory with inventive employees.

The Jupiter/Uranus combination is highlighted in his chart.

1. Jupiter rules Sagittarius (sign of the Moon and Ascendant in his chart).
2. Uranus rules his Sun in Aquarius.
3. Uranus has a prominent place opposition natal Midheaven
4. Jupiter is trine Midheaven, so that both Jupiter and Uranus are connected with Midheaven (the symbol of career).
5. The midpoint Jupiter/Uranus is in hard aspect with the Moon (for an inventive soul)
6. In the months before and after the invention of the light bulb the progressed Sun of Edison was semi square Jupiter/Uranus (a) and progressed Mercury was conjunct progressed Uranus (b) while progressed Midheaven was opposition Jupiter/Uranus (c. a midpoint Yod pointing at the fact that his name and status changed in a positive way)Three indications for an invention and positive change together promissed the realisation of the issue.

Mr. Edison married twice, both times with someone who was much younger. Notice the double bodied sign Gemini on the cusp of the seventh house of partners...Gemini is not only the symbol of twins, the twins are also young:). See my other blog about double bodied signs and more than 1 marriage...
For more about Jupiter and Uranus, click the label 'Jupiter Uranus' on
(c) http://astropost.blogspot.com
Geplaatst door Astromarkt op 8:23 AM