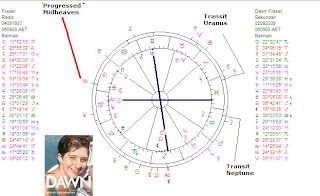 Astrology works with symbols. Planets and positions in the chart are symbols, the equivalent of a complete vocabulary. Neptune, for example, is the symbol of the fantasy, dreams, art, mystery, secrets, mediums and ... the media. Uranus is the symbol of (among other things!) NEWS ... and astrology. Dawn Fraser, a champion swimmer in Australia, has a progressed chart with Midheaven in the 25th degree of Leo. That is exactly inconjunct Uranus and opposition Neptune. She is in the news today because she fought with a young man who was in her garden without invitation and who (she says) threatened to kill her. Her chart shows that he should not have done that. She is defensive, self supporting, she has got muscles and she acts immediately! The chart is clear about that. Angular Mars sesquisquare AC/MC , square angular Sun and inconjunct Uranus is 'Astrological' for prominent, speedy, sometimes controversial, immediate action and anger.

SUN AND MARS
Dawn Fraser has an angular Mars and Sun in the natal chart. The Sun is square Mars. It is obvious (at first sight) that we deal with a performer (Sun), a promoter (Mars) or someone who is a star (Sun) in sports (Mars) in whose life men, action, sport or enterprise is an important aspect. And why is she a swimmer? Gemini on Midheaven refers to the use of limbs (arms, hands) and Neptune (God of the sea) is square her Midheaven). Also the Moon - ruler of the water sign Cancer- is rising before the Sun and 'calling'*).

Sun square Mars is not afraid to hit, beat and strike if necessary. It is an aspect for those who (have to) deal with aggression or who have to be assertive. They are often placed in situations that require action.

URANUS AND PLUTO
Another interesting observation is that Mars is inconjunct Uranus and sesquisquare Pluto. This combination of aspects demands - Pluto- immediate - Uranus - action - Mars ...That is very useful in sports when you want to be number 1 and: for immediate action when you are dealing with an intruder.
Uranus-Pluto is the combination of impulse and dramatic changes. That is why Uranus-Pluto combinations are involved with arrests. Dawn Fraser was arrested once (in 1964), when transit Uranus was conjunct her Ascendant and progressed Mars was inconjunct Pluto. Conclusion:

When you see the combination of Sun square Mars and Mars inconjunct Uranus you see an 'angry young woman', even at old age. Intruders are being warned!:

BTW: Mars and Pluto are in aspect with the crosspoint of the chart (the midpoint AC/MC) to tell us that she will defend herself. Mars and Pluto refer to the drive to be a winner or an authority.

*)The Moon in Leo is rising before her Sun and is not making aspects in sign or orb 5 degrees (calling). For more about 'calling planets' use the label. For more about the Mars-Uranus combination in charts, see my site Astromarkt.