Serena Williams didn’t take it well when she lost her placement for the US Open Finale (see the You Tube video). She smashed her racket and looked aggressive. Emotions seemed not to be in control. How could that happen? Does her chart explain the behaviour? Yes it does! She is first of all following her emotions (Moon rising before the Sun) and right now the progressed Moon is in the final degree of a sign, without aspects. Emotions are being highlighted. Behaviour (the way that you do things) is also symbolized by the Ascendant. The natal Ascendant is inconjunct her natal Sun: 'starlike' behaviour that is not always been accepted by the outside world, just like now... 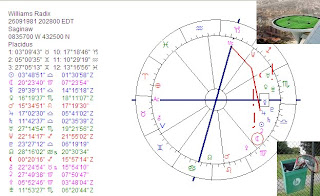 It is easy to see the star in this chart and the strong will to be a winner (‘calling’ Sun and Pluto are both in aspect with AC/MC, for example). It is also easy to combine circumstances (training all her life), genes (her sister is also a tennis player) and the chart to get a super star. Speaking of stars: how about the effect of Sharatan? Here is more about the chart of Serena Williams...

MOON for MOODS
The Moon is rising before her Sun and is square Neptune. She may be overly sensitive. In the progressed chart the Moon is in the final degree of Virgo, a Void Moon opposition Aries Point. Emotions – at any level, moods – are shown to the public…

MERCURY for COMMUNICATIONS
Mercury is on the Descendant and not making major aspects in sign or orb 5 degrees: this is reflecting ‘communicating at any possible level’.

MARS for FIGHTING
Mars is inconjunct Midheaven: sport and enterprise, but…it costs energy or involves aggression (too much).

SUN for STAR
Her natal Sun doesn’t make major aspects in sign or orb 5 degrees: it is a ‘calling’ Sun, drawing attention at any possible level. The inconjunction is reflecting the risk to loose balance. And the Ascendant is the gate to the outside world. Sun inconjunct Ascendant: arrogance and possible lost of honour are two of the interpretations. The attitude helped her to be a star, perhaps, but the outside world doesn’t always ‘buy’ the starlike airs, even if she IS a star).

SHARATAN
What the drawing above doesn’t show is, that Sharatan is on the Ascendant. The fixed star Sharatan means: violence, defeat, accidents, injury, danger, honors (according to Astrologycom.com). The Ascendant shows how we present ourselves. Serena Williams is a famous top tennis player and honors have come her way. But every professional sports man or woman will be defeated one day. And no one wants to be defeated, so: beat it?:)