Chart of Queen Mother Elizabeth (and the Windsors) 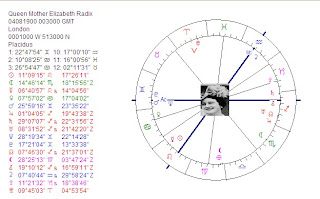 The Daily Mail has a story about the late Queen Mother of England called 'That spiteful old soak dedicated to making our lives hell', quoting the Duke of Windsor in 1971. 'Our lives' were the joined lives of the Duke and Duchess of Windsor. When you have a quick look at her chart you immediately notice Mars-Neptune opposition Saturn, on the horizon. This aspect is indeed of crucial importance. She spent half of her life alone and lost her husband Albert (later King George) in her early 50s, in 1952.

It seems that she blamed the Duke of (former King Edward VIII) for this. Because of his abdication, in order to marry the divorced Wallis Simpson, Albert had to become king and that was too much for his health.

Saturn is the symbol of blame and restrictions or barriers. Queen mother Elizabeth and Wallis Simpson had their Saturns in bad aspect with each others Suns! (Saturn of Wallis Simpson is square the natal Sun of the Queen Mum, and the Queen Mother's Saturn was exactly opposition the Sun of Wallis Simpson). It is likely that the ladies blamed each other for the bad sides of their lives. There is another reason for not accepting her sister in law: she didn't belong to the nobility. Leo (Sun sign of Elizabeth) CAN be very proud.
Also, Edward VIII had a strong Mars on Aries Point, square the Sun. Elizabeth had Mars conjunct her Ascendant and semi square Sun. They were both fighters, both 'sharp'.

REVENGE?
The Queen Mother had an afflicted Scorpio Moon, square Sun, semi square Saturn and sesquisquare Neptune. Scorpio Moon ladies are tough and that is why we see lots of them managing big companies. Scorpio is the sign that doesn't forget and seeks revenge (when afflicted). Because of the abdication of the Duke the Queen Mother's husband had to become King and she considered that to be one of the main reasons for his early death. Heredity is an item in the synastry between their charts: his Ceres is square her Ascendant/Descendant.

They share aspects the kind of aspect that show us that they shared bad memories (Moon-Saturn) and unpleasant affairs (Mars-Neptune).

CERES
When her husband Albert died, in 1952, her progressed sun sign had changed sign to Libra, reflecting her changing life and life style. From that day on she was 'Queen Mother' and she hated that title. Notice that Ceres - the symbol of motherly love - is not very far from Midheaven (and perhaps correction of the hour of birth would even bring Ceres closer to the MC). So she became a most prominent female icon.

More about the match between Simpson and Edward on my blog astrology-love-romance.blogspot.com

Read more about the feelings of the Duke on Daily Mail...