Ending an affair (or making a decision at all) can be difficult. It is difficult for Libra. It is difficult for people without squares. And it is even more difficult when you have too much sextiles (5), no squares, and a Libra Moon, Venus and Mars. Libra is the sign of relating, being together, balance and company.
Someone I know was about to settle down, but he was not 30 yet and a Sagittarius with a Sagittarian Ascendant and Mercury, Jupiter, Uranus and Neptune in Sagittarius, too, very Sagittarius. Very Sagittarius males want to be or feel free, at least when they are young. So he got cold feet, but he was too polite (Moon Libra, Venus Libra) to tell her directly. Or maybe he was just cruel enough not to tell her directly (he has Saturn and Pluto without major aspects, and Pluto = Venus/Saturn, so that makes him a ‘die hard’ in love). Or maybe he just waited until he found a replacement for his need for company (Moon Libra!). The easy way out was steeper than he had imagined, I suppose. She threw him out when he did a ‘Tiger Woods’.

That was with transit Saturn square progressed Sun, a perfect transit to end a period, say goodbye and break up. Transit Saturn came right after transit Uranus inconjunct Venus (reflecting an affair, an adventure, falling in love, but*…yes, but he had another!).

Cold feet. There are 5 sextiles in his chart and there is no square. Some other girl had to help him out and open the door to freedom again. He couldn’t decide for himself and almost had a giant mortgage. Sometimes, when Saturn comes bye and breaks something , it is maybe better. Mortgages may be scary, but there are other kind of restrictions, responsibilities and limitations now. He also is a bit lonely, now. The other girl was just ' the other girl'. Sigh... 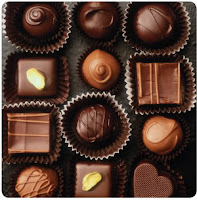 This kind of thing also happens at work. There are persons who can’t decide to leave a job, even it they know that if they stay, they will turn into slaves. They keep hanging on, because they are too loyal or because they are afraid of changes or because they like to hang around and feel at home (like with Venus in Cancer). A lot of them are waiting for the lottery to release them. Some manage to be fired. Others find comfort in hobbies and pleasures or they eat a lot of chocolate. Hmm, if the young man of this story had not found an available girl, he would have had to stay and make the best of it. He would have to eat a lot of chocolate to make it feel good. He has Moon and Venus sextile Jupiter, he would love the chocolate, lots of it!

* inconjunctions have to do with a ‘ but’, often. The inconjunction is between a trine and an opposition, between an easy flow and asking yourself questions. Venus-Uranus is for falling in love and a preference for a change or excitement. There is something out of line with an inconjunction. There is a ‘ but’, something that hinders the easy flow

Nice post. And a good commentary on the human condition.

Update:
The young man blames himself and feels sorry now that he is alone. Well, in fact everybody blames the young man... That is in line with Saturn square progressed Sun, too.