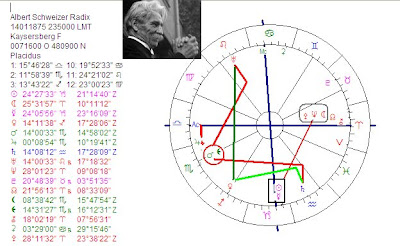 Albert Schweitzer was born on January 14, 1875 in Kaysersberg and he died in Africa. He is a famous person because he managed to control his temper (Mars-Saturn-Uranus) and because he had a creative way to control his moods (Moon quintile Saturn)). I quote himself:" I had to fight hard against my hot temper. I remember many events of my childhood which still humiliate me and keep me watchful in this struggle." Mars-Uranus-Saturn...: control (Saturn) over a hot temper (Mars-Uranus)..

The chart is clear about it’s owner: it is a gifted and sensitive person with a drive to convince others and his goal is to collect money*) He is an idol, still and that corresponds with Sun quare Neptune, the same aspect as in the chart of Barack Obama. Perhaps he is not exactly the person that the world believes he is, but...it might be true. If he is really a hero and a saint' this chart proofs that you can use any hard aspect in a positive way. Sun square Neptune in your chart might just enable you to make your dreams come true...And dr. Albert Schweitzer is a good example of that.

My files tell me that he was born at 23h50 and I wonder if that is correct, because there is no angular planet in his chart. But let us see if there is an artistic pattern, because he was only 7 when he composed a psalm. This talent was inherited. His father and grandfathers played the organ. Just like in the charts of other artist. There is a pattern of artistic talents in his chart (Moon, Venus and Neptune related to Midheaven.) More examples of the patterns of talents are to be found on my blog Art & Astrology.

Albert Schweitzer was a very ethical and sensitive person. Ethics, he said, was nothing more than a reverence for life (being in awe for life).

AFRICA
Jupiter is 'calling' in his chart, because Jupiter does not make any Ptolemaic aspect in sign or orb 5 degrees. That makes Jupiter an important planet in his chart. Jupiter symbolizes travelling!


RELATED:
Sun and Neptune and identity

*)I quote himself:" I had to fight hard against my hot temper. I remember many events of my childhood which still humiliate me and keep me watchful in this struggle." Mars-Uranus-Saturn...