Chart of Elvis Presley (the T-square with Uranus)

Elvis Presley was born on January 8, 1935 in Tupelo and would have been 75 today if he hadn't died when he was only 42 years old. There are several posts with his name in it on this blog, including his chart. They are HERE.. What more can I say about his chart that I have not said before? Well, I found one thing that I have not mentioned earlier: the T-square with Uranus in 5. The T-square is very important for his status and career. The T-square is strongly related to Midheaven. The most important player in the T-square, Uranus (dispositor of the 3rd house of communications), is inconjunct Midheaven from the 5th house of pleasure, (pro)creativity and entertainment. That is a statement for a unique, very special and unbalancing position in the field of show and fun, connected to his voice. 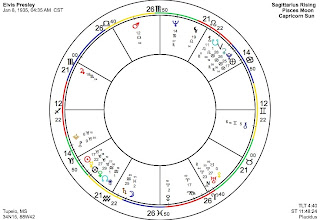 T-SQUARE AND FOCAL PLANET URANUS IN 5
The T-square of Venus (conjunct Mercury) opposition Pluto square Uranus. The T-square has Uranus in the middle, positioned in the 5th house of pleasure, show, games and entertainment. This position of Uranus might be the key to the fact that he was ORIGINAL and UNIQUE in the field. Uranus is disposing of the 3rd house of communications (the voice). Uranus is inconjunct the Midheaven. That is reflecting misbalance related to the way that he was unique in the field of entertainment, using his voice.

The complete T-square is in aspect with Midheaven..
The composition of Mercury, Venus, Uranus and Pluto makes me think of a ‘ radical’ in communicating about arts and love affair. There are more ways to read this combination.
- Communication problems (Mercury-Pluto) with love affairs and falling in love (Venus-Uranus)
- Revolutionary (Uranus-Pluto) communication talents Mercury-Venus)
- Controversial ideas (Mercury-Uranus) about money (Venus-Pluto)

But we know that Uranus is the focal planet in the T-square and that the only way to read this is:
- Suddenly (Uranus) earning money (Venus and Pluto combination) with his voice (Mercury).
The challenging problem is the inconjunction with Midheaven, coming from the house of pleasures. He had too much ‘ fun’ and died too young. But he also would not have been the famous Elvis, however ‘disproportional’ the status might have been (and in fact still is).

With the oriental Jupiter and the ‘ calling’ Moon in Pisces and Neptune on top (and Moon semi square Jupiter/Neptune) and you see the idol and the many female fans, too. See you next year, same day with more details about the chart of Elvis Presley.

RELATED
The artistic talent in the chart of Elvis Presley on Art&Astrology...

All the other posts with Elvis Presley's name in it (inclucing this one and the story about obese)...

PS See Astrology and Love for the match with Priscilla...
http://astrology-love-romance.blogspot.com/2009/05/elvis-and-priscilla-presley.html