For some reason I like Keith Richards and I use to follow the news about the man 'who will be lucky if he manages to become as old as he appears to be' (quoting someone on the net). Now I read that he quit drinking a few months ago. Did he? That must be have been hard to become sober! So I am not surprised to see hard aspects made by hard planets right now.

As you may see in the chart below, he has a Saturn-Pluto conflict and Neptune semi square Ascendant in the natal chart. Neptune-Ascendant might reflect apparent weaknesses (such as addictions are). Saturn with Pluto is the combination of the ' die hard' (see Astromarkt).
Transit Saturn and Pluto (in the 5th degree of Libra and Capricorn) are making hard aspects with the natal Neptune (5th of Libra) of Keith Richards right now and also with his natal Ascendant in Scorpio. The same ' die hard' combination as in his natal chart is now in aspect with his Neptune-Ascendant (apparent weaknesses). Let us read Saturn-Pluto afflicting Neptune as ' death end to 'alcoholism'...or is it: the disadvantage of an inquiery about addiction?

Luckily, transit Jupiter will very soon be conjunct his natal Sun. Jupiter might reflect help, support and success! And if he won't succeed to beat his addiction, maybe he will be happy, too:). Anyway, the progressed Sun changed sign a few years back, mirroring another lifestyle. Perhaps this attempt to quit drinking is part of that.
A few months back there were stories about Keith falling off a tree just like that (how did he get into that?:). Maybe his doctors gave him advice about the risks of using alcohol.

There is more about Keith Richards on this blog and on Art&Astrology. See the post about Keith and Johnny Depp in ‘ The pirates’ …I quote: 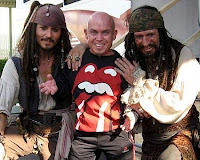 Keith Richards (18th December 1943 at about 6 in Dartford, UK) has Jupiter on top and Neptune is oriental (sort of a reverse of Depp!). Now that he finally can be and actor Keith has both Mars and Pluto trine Jupiter (a combination of success).
For music we see in the chart of Richards: Venus and Uranus both in aspect with the MC. And as astrologers we are immediately struck by the combination of Moon, Jupiter and Pluto on top: indication for an enormous popularity!

I also wrote about the friendship between Keith and Mick Jagger
I quote:

In spite of his wild reputation, the Moon on Midheaven in Virgo reflects the need for perfection in his job. The artistic talent is shown by the aspects of Moon conjunct Midheaven, sextile Venus (sense of art related to the career). Venus is semi quintile Neptune (conjunct Venus/Jupiter) for succes in arts and again: creative artistic talents.

You see, Keith Richards happens to be one of the world’s greatest guitar players and his chart tells us about sense of rhythm (Venus-Uranus), artistic talents (Venus with Jupiter and Neptune) and popularity (Moon, Jupiter, Pluto)! And about apparent sensitivity that easily turns into being too soft to handle alcohol and drugs. It is one of the ways to reflect Neptune semi square Ascendant