An hour of birth for Sherlock Holmes

Sherlock Holmes is one of the few characters in a book with a date of birth and it is January 6, 1854. Read Tonic.com about the reason why it is January 6. I started looking at the chart without hour, and than I got the idea to find a suitable hour of birth. It is a complete fantasy, I know, pure fiction but: 9:45 a.m. fits the man of the books of Conan Doyle and of the latest movie. It is an ambitious intellectual, sometimes overdoing it when he talks about his methods. He is married to his job and very dedicated. He also has a close male friend who is a doctor. It is all in that chart.

MERCURY INCONJUNCT SATURN ' CALLING'
On that specific day in history Mercury and Saturn didn’t make major (Ptolemaic) aspects and Mercury was inconjunct Saturn. Now that is an aspect that is very interesting for the detective who used certain scientific methods to find out who ‘done it’ . The calling Mercury inconjunct Saturn is reflecting scientific (and sometimes restricted) information at any possible level and without balance coming from an ambitious intellectual. Very Sherlock!:)

JUPITER
The ambitious intellectual is an optimist and a traveler who goes for success. Jupiter is oriental to reflect that. Mercury, Saturn and Jupiter together tell us about the mistakes and the glory of his intellect. Jupiter in the 11th house gives him a friend who is publishing about his successes and who is a doctor (very Jupiter).

DEDICATION
Watch Venus quindecile Mars! That is a guarantee for a strong focus on a passion (a dedication) or an obsession when it comes to making love. Mars is in the 7th house, afflicted by Venus and Pluto (Mars is sesquisquare Pluto). Mars is the focal planet in a pattern (funnel), in Virgo (…) and in the 7th house. Partner (7) is male (Mars) and it is complete decent, really (it is Virgo). That explains his relationship with woman and the dedication to his work. He was married to his work!

DISCRETION AND SECRECY
The 20 degree Aquarius Ascendant is in the middle of Neptune and Pluto? He is always dealing with matters that require discretion and he is investigating (Pluto) hidden and obscure things (Neptune). Neptune is square Midheaven, because there is some secrecy about the man and because he is after all just a fantasy. The Sun is on AC/MC, and he IS a star!Sun/Moon = Venus and that means that he is motivated by pleasure fun love talents and diplomacy or art. And of course, Sherlock Holmes IS fun! He also likes citing Shakespeare, so there is a need for beauty and art. He is well dressed and he smokes a pipe (see the picture:). I can explain why he is smoking. It is Neptune in the first house in Pisces!

INVENTIVE
Now I almost forgot to mention Jupiter ruler 10 trine Uranus ruler 1. It is a combination for being inventive and for successful techniques used in his profession. That completes this post. Sherlock Holmes did it! He must have been born at 9:45. Case closed. Here is the chart. And here is the link to the trailer on YouTube. 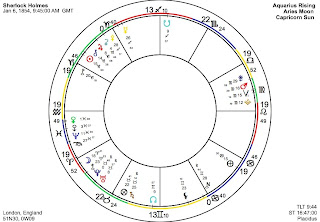