Pope Benedict and the difficult transits

The charts of leaders often reflect the situation of the followers or of the institutions/nations that they lead ore vice versa, like the charts of coaches are reflecting the winning or losing of their teams (see the label ‘ football’). The Pope's chart is reflecting the situation in the field where he works and lives, too, now that scandal after scandal is tormenting the Roman Catholic Church, causing serious imago problems. Priests in Ireland, the USA, Germany and Holland abused young boys in the 60ies and 70ies and now the victims are telling their stories. It is a hot item in the newspapers in Germany and Holland now. The Pope, Benedict 16th, must be very uncomfortable with this situation. It happens to be the “ Year of the Priest”!

His chart is reflecting the depressing stress and upheaval by means of hard transits of Uranus, Pluto and Saturn, in a short period of time. Because Saturn and Pluto are retrograding in 2010, the transits will be repeated, with a little break in June (when there are festivities because of the Year of the Priest). Above you see the chart with transits and progressions of today. Below is the same chart for June 9, 2010.

URANUS
Uranus is the planet that symbolizes consternation and exciting or astonishing news. Uranus is important in the chart of the Pope, because Uranus rises before the Sun*) and makes a (wider) square with Midheaven. Transit Uranus in Pisces is now in the 26th degree of Pisces, exactly square the Sagittarian Midheaven of the Pope. Transit Uranus square MC in the signs of religion and belief is reflecting the upheaval and consternation (Uranus) that is effecting the name and reputation(MC) of the church (Sagittarius and Pisces). The importance of Uranus in the natal chart makes it an importants transit. It is one of the transits reflecting change (see the list of indications for change on this blog…). And there is more depressing stress in the chart of the Pope.

SATURN
In the natal chart of the Pope the midpoint Sun/Moon is square Saturn. He is motivated by structure, hierarchy, by managing and by what is classical, old and reliable. Saturn is important, because Saturn is the most elevated planet in his chart, in the ninth house and in Sagittarius; this is reflecting the more conservative conviction and the dogmas.
The progressed Sun of the Pope is now square natal Moon, while the progressed Moon is opposition natal Sun. The progressed Sun/Moon midpoint is almost exactly square Saturn, so that the combination of the natal chart is being repeated. 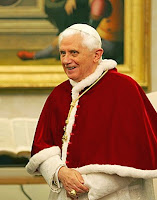 Transit Pluto is now trine the progressed midpoint Sun/Moon (square Saturn) and quindecile the natal Sun/Moon midpoint. Quindeciles often refer to a strong focus or obsessive attention and Pluto usually forces you to to do so.

There are several ways to interpret the combination and I won't mention them all here. I just refer to the earlier post about the progressed Sun conjunct Pluto in the Pope's chart (choose the label ' religion').

JUNE
Jupiter wll be conjunct natal and transit Uranus in June this year. See the label ‘ Jupiter Uranus’ for examples of the effect of aspect or midpoint, that Ebertin named ‘the thank God’ combination. Maybe it is a relief that than the ‘ Year of Priest’ will end (with an international gathering of priests in Rome -‘ Christ fidelity fidelity of the priest’ - from June 9-11) with positive attention for the profession? We will have to wait and see. By that time there is little left of the hard transits above. However, they will be back later in 2010, so it might just be a break. See the chart of June here.

*) Many very old people have Uranus rising before the Sun. See the label ' old' . When this pope started, there was the idea that he was an interim pope, because he was already old. He must be in good condition, considering the fact that he is able to do his job at his age and under the present difficult circumstances for the institution. Still, it won't be easy with these transits and progressions.

For more about religion and the Pope, see the post (use this link)

In addition:
Transit Pholus is now square progressed Midheaven: this introduces the catalyst, the turning point and the uncontrolable situation...