The Crystal Cathedral is in financial trouble. The famous minister, Robert Schuler, was born September 16 1924. That means that his progressed Sun is now in the 20th degree of Sagittarius, square natal Uranus, the recipe for upheaval and unexpected change. That progressed aspect is resonating the natal Sun opposition Uranus and the effect is stronger because of that resonation.

Here is the chart of the day of birth of Robert Schuler, progressions and transits. 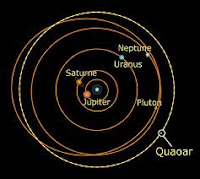 What the chart drawing doesn't show is that transit Quaoar is conjunct progressed Sun. Quaoar is the symbol of new perspectives. Maybe he finds a way out of trouble, somehow? Or maybe he manages to create a new life style, retiring? Natal Mars quintile Jupiter and transit Jupiter conjunct progressed Mars are good for successses, so: who knows. And indeed: who knows!? Because the man of the Hour of Power has an unknown hour of birth...So it is not known where exactly the Moon is, how the angular positions are and what object is in aspect with Sun/Moon midpoint or AC/MC. But every well known person with a progressed Sun in hard aspect with Uranus somehow manages to be mentioned in the newspapers. Uranus is also the symbol of surprises, sensation and ....news. The news is the possible bankruptcy of the Crystal Cathedral.
There is more about Robert Schuler and his son on this blog...http://astropost.blogspot.com/2008/12/how-astrologically-robert-schullers-son.html
Some of the highligths of his chart:
- Neptune rises before the Sun
That is for an idealistic or romantic orientation.
- Jupiter inconjunct Pluto is the aspect that shows the risk of successes and the price that you pay for it.
LINK to the news
http://www.huffingtonpost.com/2010/10/18/crystal-cathedral-bankrup_n_767219.html?utm_source=twitterfeed&utm_medium=twitter
If you wonder what Quaoar is, see this post...
-
(c) http://astropost.blogspot.com
Geplaatst door Astromarkt op 7:41 AM