Disaster Japan and the Emperor's chart 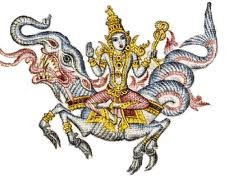 The leader's chart (that of a president or coach) often, if not always, resonates what happens to the nation, club or group of people that he or she is responsible for or taking care of.
The chart of the Japanese Emperor Akihito is also mirroring the nation's situation and of course: his own concern. He was born with the Sun in the first degree of Capricorn. That is exactly square the position of Uranus at Zero Aries, now.
Watch the transits and progressions for March 11, the day of the earthquake and tsunami.

1. Transit Uranus is square with natal Sun and quindecile Midheaven
2. Progressed Varuna is getting closer to an opposition with Midheaven
3. Transit Saturn is on natal Midheaven and 75d Sun, and opposition  Varuna.
4. Transit Quaoar is square progressed Ascendant.
5. In the progressed chart Mars is sesquisquare Midheaven.
Mars, Saturn, Uranus with Varuna and Quaoar...

Varuna is the symbol of floods (the ancient God of the Waters). This symbol is angular in the natal cart of the Emperor, reflecting the importance of the theme.
Uranus is the symbol of shocks.. And Saturn is the symbol of anything that breaks. With Saturn on Midheaven there is concern and there are obligations/duties. With Uranus square Sun there is a nervous situation. Quaoar-Ascendant refers to perspectives.

Here is the progressed chart with transits:

LINK
See the post about Emperor Akihito and his wife Michik, with the natal chart
http://astropost.blogspot.com/2009/04/famous-couple-akihito-and-michiko-japan.html
See 'Breaking news' above for more about the earthquake