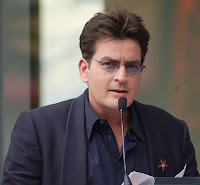 This is an update about the chart of Charlie Sheen. In the earlier post I mentioned the amount of transits and progressions with Eris, symbol of discord, in the chart of Charlie Sheen. I also named the progressed Sun sesquisquare progressed Saturn with transit Saturn square Ascendant. Saturn is the symbol of many things and one of them is 'endings'. Sun-Saturn often ends periods in life. Maybe I should also mention the third (...) aspect with Saturn: Progressed Saturn is (still) opposition natal Sun. The opposition between Sun and Saturn in the natal chart got closer and closer during the years, making life harder and causing more and more distance.
The presence of Eris tells us that Sheen faced (Sun) the responsibilities (Saturn) in an atmosphere of discord. And then came the transit of Mars, fuelling the situation. Mars is the symbol of fire. Yesterday Charlie Sheen was fired by Warner Bros. These are the transits and progressions of Mars:

You don't need to get fired with 3 or more of such transits/progressions with Mars, but there is always a risk of a conflict and getting hurt/hurting someone. The combination of Eris (discord) with Mars and Saturn (death ends) and the situation (addiction, media coverage) resulted in this.