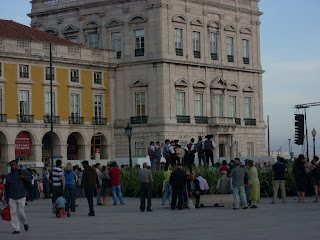 You know, I just love Pholus. Since I 'discovered' this object, I see it everywhere, whenever there is a vital turning point with a risk of shooting your feet. (Pholus isn't always 'nice'). Jose Socrates was the Prime Minister of Portugal. Yesterday the Portugese PM quit his job. Portugal's economy is at worst and the parliament refuses to accept the measures. Socrates is now trying to find other political partners. If this doesn't work, there will be elections within 2 months.
When you say goodbye and announce new elections, there is a big chance that the opposition will win, especially when they make promisses about wages and pensions. Anyway, back to astrology: Sun-Pholus is in his progressed chart and in the natal chart. That natal aspect shows the importance of the present progression.
In the natal chart there is 144d difference between Sun and Pholus. That is Sun biquintile Pholus (the chart drawing doesn't show this, but 307 minus 164 = 143=bq). The existence of this aspect adds to the importance of the progressed aspect. It means that mr. Socrates is able to create turning points in live and capable of dealing with them. Now he has a chance to show it!:)
In Jose Socrates progressed chart the Sun is now exactly square Pholus. Pholus is the symbol of the risk of getting hurt when your life or lifestyle is at risk. During a transit or progressions of Pholus something relatively small might afterwards have been of crucial importance for the start of a range of events, like the first bubble of a waterfall. Pholus often is the catalyst.
PS Of course there was more, like Mars quintile Uranus for a creative ' short fuse' and making a quick change (at the right moment), or the transits of Jupiter and Saturn with his natal Sun (ups and downs) and Mars inconjunct Nessus (in the progressed chart that you above). Nessus, that is the ' guy' who took revenge after death. The new government will have to deal with big problems...
`LINK to 72 posts about/with Pholus or read about the retrospective impact of the death of JFK (when this President became an idol) for the development of Barack Obama, whose progressed Sun received an opposition of Pholus when he was only a todler  on November 22, 1963.

For Jose Socrates chart with hour of birth see Cova do Urso: http://tinyurl.com/4p5qfsl
(cut and paste)