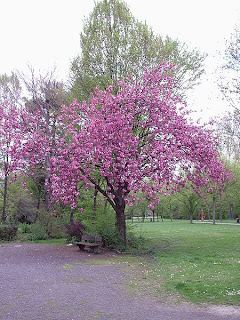 We long for warmth and blooming flowers and we are still in the middle of global unrest and tension. The chart is mirroring that. The chart of springtime has the Sun between Mars and Uranus, with the Sun conjunct Uranus. The combination of Sun, Mars and Uranus is the combination of the short fuse, incidents and techniques (or unconventional struggle) at work. We are in an explosive situation in many ways. There is military action in Libya, there is the problem with the nuclear plants in Japan...Here are the charts of springtime in Tokyo and Tripoli and a chart related to the flowers and the bees: the Keukenhof chart. As to be expected, the last one is the most pleasant one.
TOKYO
When the astrological new year starts and people are on their way to the office on Monday, the midpoint of Ascendant and Midheaven for Tokyo is exactly semi square Uranus at Zero Aries, resonating the hectic and nervous situation.
KEUKENHOF

There is a lot to do in the world, but it is springtime, too. And with Mars rising before the Sun I expect temperatures to rise soon (isn't Mars the 'hot' planet?:) One of my country's big attractions is Keukenhof, often visited by tourist from Japan, who now remain in their troubled country. Here is the chart of this attraction, with Jupiter rising before the Sun (indication of the international orientation), conjunct Venus and opposition Pluto on the axis AC/DC...there is a lot of many to earn and a lot of success was promissed from the start. The tightest aspect is Moon trine Venus, for sense of style and beauty. Isn't that the kind of springtime chart we would like to see now?

Keukenhof, start
APRIL 2: MARS CONJUNCT URANUS
On April 2, 2011 there will be a conjunction of Mars and Uranus in the first degrees of Aries. For those born on the 21st, 22nd or 23th of December, March, June or September that is an alert. The Japanese Emperor Akihito (see his chart) was born with the Sun in the first degree of Capricorn and the earthquake was with transit Uranus square his Sun and more difficult transits and progressions.
It takes more than just this transit, but still it is a warning not to drive too fast, for example. The conjunction of Mars and Uranus might be a 'perfect' moment for surgery, for acting on impulse, incidents and accidents. It is the combination of a shock or surprise (something that makes you nervous or 'wakes you up') and action, getting hurt or starting something new, like your response to the alarm in the fresh new morning. Astrology has a large vocabulary, but Mars-Uranus is supposed to accelerate whatever you do...It is a matter of circumstances, genes, gender and situation (+ the rule of 3) in what way your chart will resonate the present positions of Mars and Uranus. However, the orientational Mars is the symbol of sports, soldiers and activists or activism. It might be a 'hot' spring in many ways. April 2 is a chance for astrology to see if Mars conjunct Uranus has a more than individual effect.
In fact, it already is 'hot', because allied forces are attacking the army of Kadafi.
The Spring Chart for Libya, where springtime starts at 2:20:50 a.m. has three prominent positions: Sun and Uranus opposition Midheaven and Pholus on the Ascendant. The angular Sun, Uranus and Pholus together show a crucial flashing change and a turning point on the horizon. Add this to the orientational Mars and you may notice that the most prominent positions in this chart are for Sun,Mars, Uranus and Pholus: turning point (Pholus) and an unconventional (Uranus) war (Mars) going on (techniques and a struggle, like in Japan). Let us hope that Sun conjunct Uranus will free the people (represented by the IC).

The Ascendant of the chart of spring in Libya is opposition the Sun of Kadafi.His desperate attempt to keep his position is reflected by the transit Pluto quindecile progressed Sun. The quindecile is the aspect of obsession and fanatism (the strong focus) and Pluto is the symbol of power, force, money, influence and strategy. Also transit Nessus is opposition his progressed Sun (see http://astropost.blogspot.com/2011/02/nessus-now-opposition-progressed-sun.html). Quote:
(about Nessus:Nessus is a quite recent object in the astrological chart. The myth of Nessus is that of a centaur who assaulted the wife of Hercules. Hercules shot him, but when he was dying Nessus gave his shirt (and blood) to Hercules'wife saying that if she gave it to Heracles, he would never be untrue to her. He wouldn't, because he died.)


Of course there is more that is reflecting problems, like  transit Pluto quindecile progressed Sun (obsessed survival? danger), for example and progressed Mercury conjunct natal Saturn (that is a symbol of departure of final decission/separation and of hard decissions, too). Unfortunately the hour of birth is unknown and that is limiting the observations.
But let us get back to Nessus.
Quadhafi became Libia's leader on January 15, 1970.That was with transit Jupiter exactly square his natal Pluto (a sign of success) and... opposition Nessus. There he is again: Nessus. Just a quick observation...