Neptune will enter Pisces on April 4/5 2011, but of course, Neptune was in Pisces before. That was before the discovery of Neptune. You may notice that it was a year to remember, just like this year is. The Astrodatabank Ephemeris shows that Neptune moved to Pisces on February 18, 1848. That was three days before the publication of the Communist Manifesto by Karl Marx and Friedrich Engels, introducing a new ideology. 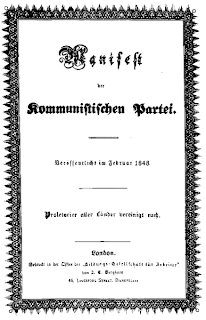 Wikipedia says about 1848: 'Year of the Revolutions' 'Spring of the Nations' and that is because there were revolts, constitutional changes and revolutions all over Europe:
- France (February 24, abdication of the King),
- Austria and Hungary (March 3 and revolt in Vienna on March 12),
- Berlin (March 19),
- Stockholm (March 18 and 19, 30 persons died) and
- even in the still very rural Netherlands there was a new constitution on November 3, 1848, against the wishes of the King.
- Switzerland is also on the list (Federal Constitution of November 1848). In 1846 the uprising in Galacia had been suppressed, but in 1848 the authorities gave in, more and more.

Right now we see revolts all over Northern Africa and in some of the Arab countries.

MEDIUM
When sunsigns change, lifestyles change. Pisces is not Aquarius: there is difference between those signs. Now why is Neptune's transfer from Aquarius to the first degrees of Pisces resonated by revolts, revolutions and changes in constitutions?  I think that part of the explanation is that Pisces is the sign of the 'media' and mediums, transporting messages that concern us all.

Mass media bring us the news and influence our state of mind. Just before Neptune went to Pisces the media had become more and more of influence. I read that after 1830 there was a sort of an explosive growth of newspapers, suddenly available for the people. And 1848 was the year of the foundation of Associated Press. When Neptune changed sign, ideologies and beliefs and ideas changed, starting with chaos and the news was distributed faster than ever in history.

Today, you see that the new media (Facebook, Twitter) were used to gather the people...The media were the vehicle for ideas today and then. I am just thinking out loud...

IDEOLOGY
What new idea will be brought into the world with Neptune in Pisces now? Neptune in Pisces introduced communism in 1848: Working men of all nations, unite! It was a new ideology, a new belief, a new -ism with 10 points*). The situation of the members of the working class has improved since then, in Europe, out of fear for communism. In Eastern Europe the Communist Party ruled for many years.

LINK
http://astropost.blogspot.com/2008/05/birth-chart-karl-marx-and-his.html
About the charts of Karl Marx and Friedrich Engels

EXTERNAL LINK
http://twilightstarsong.blogspot.com/2009/06/arty-farty-friday-neptune-art-in-glass.html
About Neptune in Pisces, Tiffany and more art in glass...


1. Abolition of property in land and application of all rents of land to public purposes.

3. Abolition of all right of inheritance.

4. Confiscation of the property of all emigrants and rebels.

5. Centralisation of credit in the hands of the State, by means of a national bank with State capital and an exclusive monopoly.

6. Centralisation of the means of communication and transport in the hands of the State.

7. Extension of factories and instruments of production owned by the State; the bringing into cultivation of waste-lands, and the improvement of the soil generally in accordance with a common plan.

8. Equal liability of all to labour. Establishment of industrial armies, especially for agriculture.

9. Combination of agriculture with manufacturing industries; gradual abolition of the distinction between town and country, by a more equable distribution of the population over the country.

10. Free education for all children in public schools. Abolition of children's factory labour in its present form. Combination of education with industrial production, &c., &c.