Neptune will enter Pisces tomorrow. That is not for the first time in history. I have written about the Neptune in Pisces of the 19th Century, Karl Marx and the 'Year of the Revolts' (http://astropost.blogspot.com/2011/03/neptune-in-pisces-in-1848.html).
Now I will show you the events of 1684, when Neptune entered Pisces (on March 4). With today and 1848 in mind, I was searching for revolts and for ideology. I found one ideological event and it is immediately an important one: the Holy League. Members were Poland, the Holy Roman Empire, Venice, Tuscany, Russia and Malta. They fought the Ottoman Empire. On January 26, 1699 the Treaty (Peace) of Karlowitz (Karlovci) was signed, with Neptune in 1 degree 4 minutes Aries. 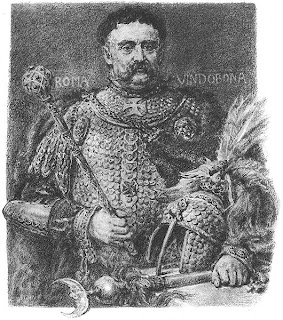 Jan (John III) Sobieski, a Polish (chosen!) King, lead the army that liberated the besieged Vienna. He was born on August 17, 1629. His chart (no hour of birth) is here with the transits and progressions for the day of the victory. With Sun and Moon in Leo he was the prototype of a leader. The tightest aspect were Sun quintile Mars (the creative fighter) and Jupiter square Neptune (the issue of religion); he had the chart that matched the events.

"Holy League of 1684 was initiated by Pope Innocent XI (...)This alliance opposed the Ottoman Empire in the Great Turkish War and lasted until the Treaty of Karlowitz in 1699"

Feast of the Holy Name of Mary, or simply Holy Name of Mary is a feast day in the Roman Catholic Church celebrated on 12 September to honour the name of Mary the mother of Jesus. It has been a universal Roman Rite feast since 1684, when Pope Innocent XI included it in the General Roman Calendar to commemorate the victory at the Battle of Vienna in 1683.

You see, Jan III had placed his troops under the protection of the Blessed Virgin Mary.
SECOND TIME NEPTUNE IN ZERO PISCES (1685)
Neptune went back to Aquarius. On January 2, 1685 Neptune entered Pisces again. Religion (ideology) was news when the French King announced that Protestantism was illegal and thousands of Hugenots left the country.
SO...
Just like in our days, now that the revolt in the Nothern African states began with Neptune in the final degrees of Aquarius, the events that changed history started in 1683 (with Saturn opposition Neptune in Aquarius). In 1684, when Neptune was in Pisces, the Holy League was founded. That was on March 5, 1684, to be precise. Have a look at the Swiss Ephemeris for the year 1684 on Astro.com and see for yourself where Neptune was: in the very first minutes of Pisces!
Holy League in 1684
Communist Manifesto in 1848
Memorable ideological and religious moments in history with Neptune entering Pisces.
Also visit: Astromarkt.net for example 'Astrology of Popes'
Geplaatst door Astromarkt op 12:37 PM