The Pope, the Queen, Uranus and the wedding 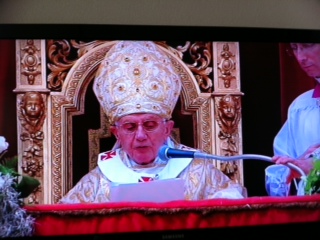 Today Pope Benedict blesses the world, like every spring. Here are the transits and progressions of today:

The difficult transits of last year are not completely gone yet or are being repeated. Here is the chart and you may notice:
- transit Neptune sesquisquare Progressed Sun
- Saturn will be square progressed Sun in September and from November 2011 till September 2012 Saturn will be square natal Sun.
- transit Neptune is opposition Progressed Venus this year and was square natal Venus last year
Those are not easy transits (Saturn/Neptune and aspects related to the 6th and 8th house). This is especially so for a man of 84 on top of one of the most challenging hierarchical systems in the world. It is not that strange that he is still doing his job. I found rather a lot of people who became very old and had Uranus rising before the Sun, just like the Pope has (see chart above). He is not the only old leader. The British Queen just celebrated her 85th birthday. She was born with Uranus rising before the Sun, too, see her chart:

The transits and progressions are for the day of the wedding of her beloved grandson William (see the post about the interaction of their charts). The planet of prosperity is exactly square her progressed Sun on the April 29. She might feel just as blessed as the people on Saint Peter's Square today.
LINKS
Astromarkt about the Wedding...and the couple...
Last year's post about the Pope...
http://astropost.blogspot.com/2010/03/astropost-pope-benedict-and-difficult.html
And see the label 'religion'