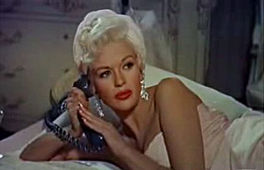 Jayne Mansfield was born April 19, 1933 and she died too young, after a car accident on June 29, 1967. In those 34 years she managed to marry three times, have 5 children and maintain a perfect body. For the number of divorces I 'blame' Venus conjunct Uranus, the situation/circumstances (the artistic scene) and her money.Venus-Uranus falls in love easily. She also has Sun conjunct Uranus (for being independent and finding the wrong guy) and trine Mars (out of sign, man are important), with Venus in Aries (love at first sight, fast marriage). But first of all there is Venus-Uranus, rising before the Sun and making adventures in love and special beauty the focus of her life. Venus-Uranus is quite frequently in an important position and related to the Ascendant/first house in the charts of models.
In Jayne Mansfield's chart, the feminine Cancer Ascendant is quintile Uranus and sesquisemisquare (67.d) Venus. That contributes to her appearance (special beauty - breasts are important- etc.)

When she died, transit Mars was square natal and progressed Pluto and transit Mercury was conjunct natal and progressed Pluto. Transit Pluto is also quindecile Progressed Eris and Mars is very close to an opposition with Progressed Midheaven.Progressed Sun/Moon is conjunct progressed Chiron and trasnit Chiron is conjunct the natal midpoint Sun/Moon. Progressed Ceres is exactly conjunct the natal Ascendant and progressed Jupiter is exactly opposition natal Midheaven.
I like to point at Jupiter's important position opposition Midheaven. Jupiter is also ' calling' (not making major aspects). That is reflecting (relative) successes and the importance of...travelling (and horse power).
BTW Saturn is also without any aspect in the eight house, ruling the 8th house. The 8th house is the house of life and death. Saturn is the symbol of time (untimely, late or too soon).
And notice Moon conjunct Pallas for the female = moon pattern = pallas :)
LINK