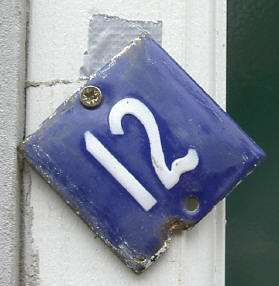 In an effort to understand why I was ‘ skipped by Jupiter’ and transit Jupiter sextile Sun and MC and conjunct progressed Sun had no positive effect (on the contrary, the doctor told me that I had H1N1, Mexican Flu), I keep seeking answers. I may have found one. I blame the 12th house!

I sought for the answer in ‘ Predictive astrology’ – The eagle and the lark – by Bernadette Brady. The 12th house is related to being alone, someting hidden, being ill, intuition and the paranormal, she says. I also read a book written before the Second World War, by Else Parker. There I found an interesting passage about Jupiter's transit through the 12th house (where transit Jupiter is right now, in my chart). Jupiter's transits in the 12th house is only a remedy, helping against things that 'could be worse' (like my flu:)...
The results of my ' quest' may not be surprising: I also found that the final transit of Jupiter is the most effective one.
But does this all explain the lack of positive or noticable effect in all cases? Please do the poll (on the left on my blog). Let us see if the 12th house was involved when your FINAL Jupiter transit ' failed'. If not, there must be another answer...

BRADY's METHOD
Using the method to read transits as described in this book, I understood WHY Jupiter worked as Jupiter did. Let me explain the method and show you that it works for reading my transit Jupiter (ruler 10 in 12, transit in 12) sextile Sun and Midheaven (Sun in 10, Placidus co-dispositor of 6th house).
The method consist of seeking the CAUSE in the natal house, the SITUATION in the transit house and the final RESULTS or effect in the rulerships (natal house). The book lists a number of causes, situations and results related to the meanings of the houses.

The planet in transit has a position in the birth chart. The houses of the planets in the birth chart describe the CAUSE. My Jupiter on the Ascendant but still in 12 was sextile the Sun on Midheaven in 10. Transit Jupiter sextile Sun/MC should be read as Transit natal 12 sextile natal 10 = cause. The 12th house is considered to be the house of seclusion (for example due to illnesses) and the 10th is the public house (career, status and condition). I visited the doctor because I could not go to work, I had the flu.

The house where the planet in transit is in (in this case, the 12th again) describes the SITUATION. That is correct. I was ill.

The houses ruled by the planets in aspect describe the RESULT. In my case Jupiter rules the 10th house and the Sun is the Placidus co-ruler 6 and the dispositor of the 6th equal and whole sign house. The flu, of course had a result for my job and daily routine.

I BLAME THE TRANSIT IN THE 12TH HOUSE
So, should I blame the 12th house position of Jupiter and the fact that the transit of Jupiter was in the 12th, sextile the ruler of the 6th house? I have a very old book by Else Parker. She wrote (in 1953!) that

the transit of Jupiter through the 12th house never brings ‘an easy time’ but that the transit will remind you about sunshine following rain and about the sun behind the clouds. She also noted that periods of rest (…) and devoted pondering would turn out to be of more value than a rush for material advancement. In the end, she promised☺, Jupiter’s transit through the 12th house contributes to to the idea that all dark and difficult things ‘ might have been worse’.

And that is fact (H1N1 is sometimes lethal).

But that would implicate that any transit of Jupiter leads to a 12-house CAUSE and any transit made with Jupiter creates a 12-house situation, while it always affects my status, career and position. Jupiter is conjunct the Ascendant and strongly influences the 1st house because of the conjunction.

I tested more transits with Jupiter.
a. Transit Jupiter conjunct Sun and Midheaven ‘brought’ me a new car, twice. It is in Sagittarius☺ . That is a 12-10 CAUSE, a 10th house SITUATION and a 10-6 RESULT.
New cars alter a bit of the daily routine in a pleasant way and it changes your ‘ wordly’ position. Perhaps the 12th house natal position should indeed be considered a first house one (because of the conjunction with the Ascendant).
So it seems that the fact that Jupiter was transit in the 12th house had the strongest (negative) effect (for the SITUATION) and that is what counted: being ill!
b. The last time that Jupiter was sextile Sun was in 1997, with the final ' hit' in December. The cause and situation were not related to me in person, but I benefitted from it (though I also ' suffered' from the situation). A real 12th house situation: I am not explaining it here:)
c. There had been sextiles from transit Jupiter before, in April and September of 2009. And nothing of importance happened...The flu was with the final transit.

QUEST
I keep looking for reasons and explanations. To explain the fact that Jupiter's transits sometimes just skipp you. there are texts that say that it is you, you and you who is responsible for not seeing the opportunities when Jupiter comes bye. Blame the victim, LOL!:) I wonder what kind of an opportunity there were, having a fever? And how about persons released by a nice judge, during a transit of Jupiter? What kind of opportunity is it to just happen to face a nice judge? The kind of opportunities that you can see or make, don't need a Jupiter transit. And a 12th house position implicates that things happen (miracles and disasters...).
Tiger Woods had support coming from his co-golfers, at a moment that he wasn't playing at all and with a negative press all over the world. He had transit Jupiter trine MC when his fellow players named him the best!*) Transits of Jupiter help you or they just don't. Unless they transit in the 12th house in which case you just have to be humble and grateful for what might have been worse, I suppose.

This all explains the 12th house transit of Jupiter in my chart, I hope. Maybe it also explains why your Jupiter had no effect (was the 12th house involved?). Of course, you have to consider the side effect of progressions and other transits. I know that my ' side effect' came from progressed Sun opposition Pluto. So I already decided to be grateful that H1N1 made me ill for weeks but didn't kill me after all `yet' (LOL!). And that my reading (getting an international virus) really fitted this aspect.

NEXT
The last week of January 2010 transit Jupiter will be conjunct Jupiter. It is a great moment to test if
a) Jupiter on the edge of the first house should be considered not to be in the 12th (and than I won't be ill); a 1-1 or 12-12 CAUSE and SITUATION
b) a Jupiter return increases optimism and conviction (how can I try not to be influenced and start chearing now?)
c) if there is a strong effect on my career or CONDITION (status) for whatever cause or situation
or if Jupiter will again ' skipp me' !
In February 2010 transit Jupiter moves to the first house. There will be no excuses any more, then:)!

*) His Jupiter is in the natal 7, the Sun in 4. Business relations, partners and family are the cause of support. Situation: Jupiter is in the 5th house by transit (being occupied with entertainment, love and …playing). And the result is a message from friends (3 and 11).

The Dutch Queen had transit Jupiter conjunct progressed Jupiter (her ruler 9) and in her 12th house the day after her Xmas speech on television. There were no positive effects, according to the reactions of journalists and the comments of readers. It looks like if Jupiter is swallowed in the 12th and spit out on the Ascendant:).

I asked the readers if their (transit) Jupiter was in the 12th house when 'nothing happened' and3 said yeah.

Thanks for contributing facts about Jupiter in 12, Anonymous! Is your Jupiter in the natal or progressed 4th or 8th or ruling these houses, I wonder? Apparently your Jupiter was reflecting ' periods ending" (school, relations). Or: were there progressions and transits with Saturn at the same time and was Jupiter sort of a consolation in hard times?
Anyway, I hope for you that the next Jupiter transit in 12 will be a demonstration of the benefits of it!:)

Hello!
It is, in my experience, extremely important not to consider Jupiter only as ruler of Sagittarius, but also as ruler of Pisces! Many astrologers don't take this important detail in consideration.
Natal Jupiter (in Gemini) is in my twelfth house where Jupiter is now transiting.So Jupiter is very important to me as ruler of the tenth house (Pisces) and ruler of the sixth house (Sagittrius)but also rules my South Node (in Sagittarius)!I confirm: Still nothing happens after already a long time of unemployment, but I'm definitely preparing for the Sun coming from behind the clouds! Knowledge of astrology is of great help in this very slow and uncertain proces.