Gotthard Lerch is a German engineer who sold secrets to Libya for 3,5 million euro. With the knowledge Libya could be able to produce atomic bombs now. Lerch had been on trial before (in 1990-1992) but this time he was found guilty. And this time transit Pluto was conjunct his Sun and progressed Sun inconjunct Pluto. There is certainly a transformation in his life going on and his lifestyle will be intensified. His life might even be in danger. There is a lot of stress and a strategy is needed. Pluto is also the symbol of politics.

He was born 21st December 1942, just like Hin Jintao, the Chinese president. Lerch was born in Ostschlesien (former part of Poland). He has the profile of a man who wants to be successful in life.. And his chart shows the possibility to become a ‘die hard’ when ethics are concerned.*) 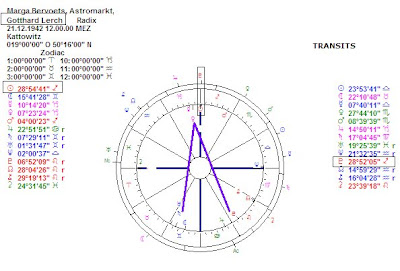 His Astro I.D.: Mars is oriental (opposition Saturn and Uranus); Sun is square Aries Point and 'calling' (without major aspects); the tightest aspect is a Yod of Venus inconjunct Saturn and Pluto.
The picture that you get is that of an activist who risks limited freedom, a leading figure who is a 'die hard' when it comes to sympathies and loyalty. Mars for the enterprise and dare, Sun for drawing attention (not good for a spy, BTW) and the Yod for the finger pointing at the issue of ethics. I almost forget Jupiter. Jupiter doesn't make Ptolemaic aspects and is retrograding and quindecile Venus and Pluto (165 and 15d) for an obsession to obtain more and more money. With Venus inconjunct Pluto there is a misbalanced issue of money. It is a combination that promises success when it comes to earning more, but the inconjunction is so often indicating lost...The prominence of Sun, Mars and Jupiter made him important and rich, but I suppose that the chart with his hour of birth will show us some tricky positions in the chart.

READ MORE:
About Venus and Pluto
Or about Saturn and Pluto

*)He shares this profile with the Chinese president, a few singers and probably thousands of others. It takes an hour of birth to be more specific. And please note that any chart should be read knowing the social circumstances, the gender and the political situation... What I mention are potentials in the chart.
Geplaatst door Astromarkt op 11:55 PM