Happy birthday, Clara Meadmore, the happy (Venus square Jupiter) virgin (in Virgo).
Clara Meadmore, born in Scotland on October 11, 1903, said she managed to be 105 today because she never had sex, she says (and she is not lesbian, she says). She travelled around a lot, instead.*)
Her hour of birth is unknown, and I bet that many of the persons born on her day of birth married and got children. Still, there are some clues. Moon, Venus and Mars are in conflicting signs. Venus is square Pluto. And when she decided never to get married, her progressed Sun was in conflict with Mars. Add this with the social-cultural soup of hundred years ago and what you get is a happy Venus in Virgo!**)

Saturn is 105 degrees away from the Sun. Venus is semi sextile Sun. Sun-Venus-Saturn is another indication of either divorce or remaining on your own. Saturn is opposition Venus/Pluto, a midpoint yod for a 'die hard in love'. Because there is also a square with Jupiter, there is also a lot of happiness related to not getting married (read it like this: Venus-Saturn with Jupiter-Pluto).

THE SOCIAL ROLE: MOON (LEARNING TO BELONG)
The fact that Clara Meadmore did not want to get married is an issue in the newspapers, even today. People use to find a partner, and maybe even have a family. Family life is linked to the Moon. In her youth Clara moved a lot and her parents emigrated to different countries. That did not make it easy for her to get attached to other persons. It may have been a nice youth and she started to like to have contacts with a lot of people, but not for long (I am just speculating now).

AFFLICTED MOON, NOT MATCHING SIGNS OF MOON,VENUS AND MARS
The Moon is afflicted. That means that the 'normal' ways to get attached to another person are difficult ways even thought there is a connection with Jupiter and it may not have been unpleasant. She says she was attractive and men asked her to marry them, but she didn't feel she should. Moon, Venus and Mars in conflicting signs tell the astrologer that it will not be easy to find a partner who matches with her needs and habits, her taste and her sexual attraction. One hundred years later she probably would not have remained a virgin because of that. But in 'her' days, there was no alternative if you did not have the need to get children and a partner. 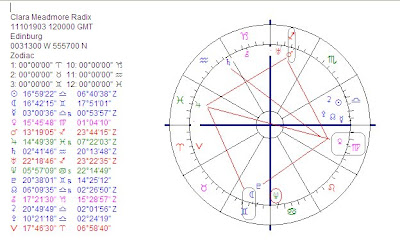 THE CHART AND CONDITIONS
The same chart, another gender and another social class or country would have produced another kind of life. Circumstances and conditions, together with the astrological I.D. mentioned above, shaped the special life story of Clara.

Maybe Uranus was angular to give her the independant approach. We don't know. Anyway, Clara was happy alone and independent and she still is. A happy Venus in Virgo, celebrating her birthday.

BTW: there is an article on my site Astromarkt about aging and the effect of elements. Having 50% in air signs is a good sign for getting old (though not a garantee, I am afraid). You can read all about it:HERE

*)(Moon is in Gemini for the need to be young and communicating. Gemini is opposition the sign of Mars (in Sagittarius). Gemini and Sagittarius are related to travelling.)
**) The nickname of Queen Elizabeth I was the Virgin Queen, because she didn't marry (yet, she had lovers). This hypocrisy fascinated me at grammar school. Maybe that is why this story fascinates me now:)