55 years ago, Klaas Bruinsma was born. Klaas Bruinsma is the name of a Dutch liquidated drugs dealer. He was born October 6, 1953 at 8:03:50 a.m. in Amsterdam. In 2003 his name was linked to that of Princess Mabel (married to Prince Johan Friso, son of the Dutch queen Beatrix).
Peter R. de Vries, the crime reporter who recently got an Emmy Award, had investigated a gossip that Mabel used to be a very good friend or even a lover of Klaas. The news sang around just before she became the fiancé of Prince Johan Friso and caused a lot of scandle. 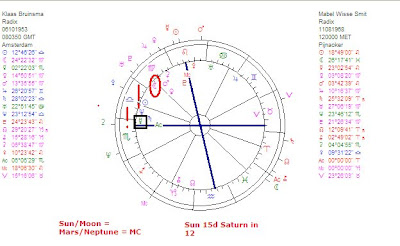 The chart of Klaas Bruinsma is above, with the position on the day of birth of Mabel Wisse Smit on the outside of the circle. The calling MC, ASC/MC = JUPITER and the position of the oriental Moon between Neptune and Pluto with Mars semi square Saturn as the tightest aspect immediately makes us aware of the fact that we deal with a man who has to fight hard, who strongly needs medications or drugs and who is successful in his field.

MERCURY FOR TRAFFIC
The complete picture of the chart of Klaas Bruinsma, the sum of the different special marks in his I.D., made him the man who he was. Let us see what Astro I.D. he had. We see a prominent ruler 1 on top of the chart (Pluto, widely conjunct the MC) for the importance of money, the oriental Moon close to Venus and Mars for the need for passion. Very important is that the Sun is calling and is in the 12th equal house. It is a perfect description of drawing attention and being the leader behind the scenes. I think that the most prominent position is for Mercury, as this planet is angular and calling. Notice that Mercury rules the 8th house of power, money, life and death. Mercury symbolizes communications and traveling. He was the narco traffic man.

CALLING MIDHEAVEN 19th OF LEO
The MC does not make any major or minor aspects in orb 5 degrees. This means that he could reach any level in society and that his position was special. The 19th degree of Leo seems to be of utmost importance. Janduz pictures this degree as that of a man struggling against the wind, while his servant leads his horse. It would be easier to sit on horseback but instead he chooses the hard and foolish way. It is interesting to know that the family of Bruinsma was not poor, on the contrary and that he liked sailing (Pisces on cusp V), also related to wind. Rudyhar, edition 1973, mentions: a party on a yacht. That is exactly what was going on. He had a yacht, the Neeltje Jacoba, and plenty of parties there. He loed sailing!
The combination of parties on a yacht and an not needed continuation of a fight against strong powers seems to clarify the nature of this chart. Not everybody born on his day of birth became a mafia leader.

TIGHTEST ASPECT
The tightest aspect is the semi square between Mars and Saturn. It is an indication for the possibility of a struggle against the law or for hard and brutal action (striking hard). Notice the 15d aspect between Sun and Saturn (in 12). There seems to be a connection between Saturn in 12 and the disadvantages of the unseen world (maybe behind bars) when Saturn is related to the Sun. There is another possible view of the connection between Mars and Saturn. His father, the owner of a lemonade factory (Raak), used to beat him up. His four children had to clean bottles every Sunday, in spite of the money that the father owned. His carreer, later, seems to have been a protest against authority (his father).

With these observations we have found a passionate and a leader whit influence, who can strike hard and is rather bitter. Now let us see if there is more information available.

Klaas Bruinsma had problems with limitations and liked to step over barriers and break free. Maybe even, his carreer was the revenge for his youth.
In the midpoint analysis there is a frequent pattern of Saturn, Mars, Uranus and Node. It is an indication for attempts to break free the hard way. He liked to provoke authorities and his own family (Saturn, Uranus, Node). This might have been a generational combination, if not Mars had been involved. Mars is the planet of energy and aggression, semi square Saturn (see above). Venus is also involved (conjunct Mars). The combination of Venus, Mars and Saturn is the combination of broken hearts and breaking hearts.

DISASTER
There are very frequent combinations with Uranus and Neptune: nine*). Those combinations can be interpreted as the misty, unseen, amorphous, alternative and strange business, due to a mind that was not working well from time to time. These planets are involved with disaster and hallucinations.
Mercury/Saturn/Node (with Saturn square Node) can be linked to the many travels and broken relationships. This person had to say goodbye very often.

DEATH
He died 27th June 1991. Transits at the time (within 40’ of orb) were:
Transit Uranus square Sun
Transit Pluto square MC
Transit Saturn square ASC
(Note that the 3 most important spots for life were afflicted by the 3 most challenging planets)
Transit Mars conjunct MC
The deathly and violent combination of Mars, Saturn and Pluto hit the angles of the chart and the sudden surprise came from Uranus.

NICKNAME
His nickname was ‘The Vicar’ (in Dutch: de dominee) because he used to be dressed in black and have the attitude of a vicar. Mercury conjunct the Ascendant is for the attitude to have a lot of critic about others and Scorpio (with the important Pluto) is for authority and the color of authority is black. The oriental Moon in Virgo might also be an important tool when it comes to telling other people what to do and how to do it the perfect way.


MORE ABOUT CRIMINALS:
Astrology chart of Marc Dutroux
Good Mie, a female serial kiler of the past