Le Corbusier was a famous architect, born October 6, 1887 at 20h30 in Chaux de Fond. That gave him the birth chart below. It is a chart that shows a passion for patterns. 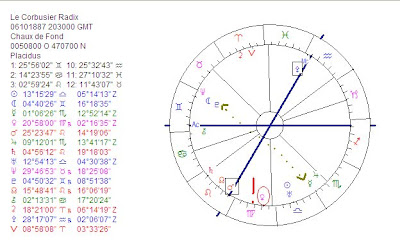 VENUS MOST PROMINENT
You see Venus, rising before the Sun (in other words: Venus will be the over the Ascendant sooner than the Sun will be). Venus is not making Ptolemaic aspects within orb 5 degrees. That is what makes Venus ‘calling’ . Venus is the oriental planet, square Ascendant. With Venus, symbol of the arts, prominent, you can easily see the importance of style, arts or diplomacy in the life of this man. He will be esthetic at any possible level.

PASSION FOR PATTERNS
Mars, planet of production, is angular (crucial) in this chart. But I also would like to point at the position of Pallas on top. Pallas is the symbol of (re-)organizing things, associating and patterns. Combine this prominent Pallas with the prominence of Mars and Venus and what you get is passion (Venus-Mars) for patterns (Pallas). Below you see a bank designed by Le Corbusier.

Le Corbusier also developed a system, Modulor. The need to shape order might also be related to Moon sextile Saturn, an important very tight aspect in his chart.

STYLE! AND WHERE IS THE ARCHITECT?
This natal chart of Le Corbusier quickly shows us the man with style, but where is the architect in this chart?

The MC (Midheaven) is in Aquarius, sign of the community and of renewal. His style is still modern today! In some ways he was ahead of his time.
Uranus, dispositor of Aquarius and MC, is tightly conjunct the Sun in the 4th equal house of living and houses and in the 5th of Placidus (creation and procreation). Sun conjunct Uranus is the combination for the free will and independent mind and also points at a tendency to be ‘different’.
He wrote several books about architecture. Notice that the MC-routing ends in the mutual reception of Mercury and Pluto (for specialized literature). The Moon sextile Saturn might also be seen as an indication of the issue of building (Saturn) houses (Moon) and the need (Moon) for structure (Saturn).

PERSONAL LIFE?
Le Corbusier had Moon conjunct Pluto in Gemini in the 12th house. To be able to create, it is sometimes necessary to be alone. The Moon in the 12th house also indicates a certain need for privacy. I can find nothing about his private life on the internet….