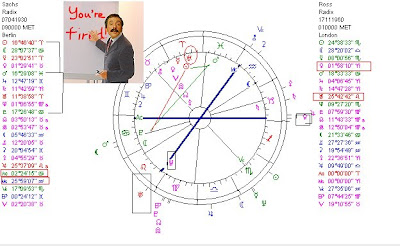 With Pluto trine progressed Ascendant and Jupiter square his natal Sun success is evident in the chart of Andrew Sachs ('Manuel' in Fawlty Towers). He was the victim of a sick joke in the Russell Brand show (BBC). Jonathan Ross and Russell Brand left a message for Andrew Sachs on the telephone answering machine, singing about sexual acts with his granddaughter. Jonathan Ross has been suspended for 12 weeks without pay now (costs him millions). Russell Brand resigned. Manuelgate, they called this upheavel.

I looked at the charts of Ross and Sachs and my conclusion is: never joke with a person who has Sun square Pluto! And certainly not when he has Mars trine Pluto, too. And in particular not when it is not on stage. You might loose the game when they get mad. Sachs not only has Pluto trine his P ASC, his Pluto is conjunct the Saturn of Brand and the Mars of Ross! Ross's Mars (work!) is conjunct the Saturn of Brand. The composition ot this triangle: Mars-Saturn-Pluto = dead end street. And the winner is...Pluto. Don't mess around with Andrew Sachs. You are not Basil Fawlty! If you are interested in the astrological background, read on...

COMEDY: Mercury-Uranus-Neptune?
- Ross has Mercury conjunct Neptune (oriental) and both are quintile Uranus. He is a film critic. I don't have his HOB, but Mercury-Neptune seems perfect to me for a film critic.

- Sachs has Mercury calling, Neptune angular and Uranus oriental, (tightly square Saturn in Capricorn). He is an artist with a call for communications.

They seem to have something in common: Mercury-Neptune-Uranus. And they have, of course. They are the main characters in Manuelgate:)!

CONTROVERSIAL
Ross has a tight square Sun-Uranus. He is rather unconventional and rebellious (even controversial).

SUN-MARS-PLUTO
Sach's Sun is connected to the tight trine of Mars and Pluto in his chart.