THE SUN-JUPITER CONNECTION WITH DOPING
New case: Bernhard Kohl
And about the 22.5 degree aspect range..

Sun-Jupiter connections: that is what I use to find in the charts of winning athletes and bikers who used doping. I have several examples (see below). And I like to add another one: Bernhard Kohl.

KOHL
Bernhard Kohl, born in Wien (Austria) on January 4, 1982 (no birth hour available) is in the news today because he admitted that he used Cera, a sort of EPO. He has a minor Sun-Jupiter aspect in the natal chart, had progressed Sun square Jupiter for long and recently had transit Jupiter conjunct Sun. But today it is a sad day for him. Bernhard Kohl has Transit Sun conjunct Saturn and he lost his contract for the next 3 years to come today.

WHY JUPITER?
Jupiter is the symbol of support, confidence, coaches,doctors, advisors and coaches. Jupiter symbolizes growth, progress and everything that 'helps you on the way' (horses, cars, and sponsors). A conflict with Jupiter makes it difficult to be happy as you are. In some cases it leads to wanting to be prosperous no matter how.

PROGRESSED AND TRANSIT SUN-JUPITER
This Sun-Jupiter connection of Kohl is being activated by progressions (from 2004 to now) and by the present transit of Jupiter with his Sun(transit Jupiter conjunct Sun). In his progressed chart there has been an almost constant square between progressed Sun, natal and progressed Jupiter, starting in 2004, up to 1.5 years ago. It means that he has been lucky and successful, but that successes didn't come easy. 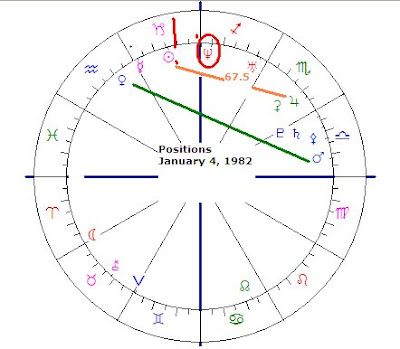 Is that enough Sun-Jupiter?

MORE EXAMPLES (the link leads to the post about their charts):

*) in my files http://www.astromarkt.net/archiefuk2006.htm I found this about Floyd Landis

“His Sun opposition Jupiter says that he wants success and it IS a success aspect, but in some cases the opposition might work out as not being honest”And - with the statement of Kohl 'I am only human' in mind - I repeat how I endid the story:
It seems you cannot win such a heavy Tour de France without some help...Should the Tour become more 'human' now? The answer is clear. Money and performing is still more important than health is.

EXPLAINING 22.5 DEGREES
67.5 DEGREES, PART OF THE 22.5 DEGREE DIAL
His Sun-Jupiter connection is 67.5 degrees. It is a mini minor aspect that I 'discovered' working with midpoints in the 22.5 degree range. Some midpoints were related to the same planets and the distance between these planets was 22.5 degrees or 67.5 or 157.5 or 112.5. I have for example Mars 158 degrees from Pluto, so that Mars = ASC/MC and Pluto is 157.5 degrees from ASC/MC.
I value the half semi square and the other distances in the 22.5 dial. I name them half semisquare (22.5), and sesquisemisquare (67.5) but I have not found more names yet and I am still searching the net. It is complicated to read these aspects, but on a certain level they contribute to the complete picture. Of course, the planets need to be significant in the chart or in the progressions in order to take them into account. I suppose that in the chart of Kohl Sun or Jupiter are angular or else this issue could not have been thát important.

SUN 67.5 JUPITER
Alfred Witte used the 22.5 degree dial for the first time. It is a frustrating distance. For example, when you want to have success (Jupiter) in life (Sun) and have to (hard aspect) perform (Sun) more and more (Jupiter).

In midpoint combinations in the range of 22.5 degrees, the Sun and Jupiter of Kohl are related to the same midpoints (in this case: Mars/Uranus and Mars/Saturn...). This combination can be read as: the frustrating will to perform even better is related to hard work (Mars + Saturn) and the drive Mars) to be fast or faster (Uranus).