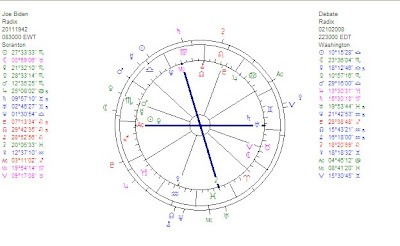 Exactly today, on the day of his only chance to beat Palin in a debate, Joe Biden has transit Uranus opposition MC. I bet he is nervous:) (PS October 6: See the bottom of this post!!!)

In an earlier post I mentioned examples of the effect of Uranus' transits in my personal chart (varying from excitement over a mouse via injuries to death of a parent).
Today I notice that transit Uranus is not only square my natal Sun (within 16 hours it will be over and done with:), but Transit Uranus is also tightly conjunct the IC (and opposition Midheaven) of Joe Biden. I can understand his nerves for tonight and I wonder if there will be any kind of surprise or 'shock' in the debate. You know, at 22h30 Sarah Palin's Uranus will be opposition the MC of the final moment. Uranus is prominent in the chart of Joe Biden. The Sun is prominent in mine:).

Question: if Uranus is the únexpected, how then could I ever predict that I will be surprised or shocked tomorrow? Maybe it will be because nothing happened at all. I will let you know.

PS October 3: maybe the surprise was that Palin did not make any mistakes this time.
PS October 3, later: Transit Uranus square my natal Sun was at 13:00 hour, when I was having lunch with a group of coworkers in a museum restaurant. Nothing special happened that shocked or upset me. Sometimes transit just do what transits ought to do: pass by:)

PS October 3k, even more later:
I found out what Transit Uranus on the IC of Biden ment. His son, Joseph 'Beau' Biden, went to Iraq today. He is a military man. Note that Biden's IC is conjunct Ceres and so Uranus is also conjunct Ceres, the symbol of the family (genes, inheritance, seed, the basic natural commitment). No wonder there was tension in his chart!