Saturn's awards...
and the chart of Kirk Douglas

A difficult transit coming from Saturn does not seem to mean difficulties, always. The awarded Televizier Ring of Paul de Leeuw and the public recognition of the good work that Kirk Douglas does, however, seem to come late in both cases. De Leeuw wanted the Ring for long, Douglas is 91 years old. High time! Should that be the meaning of the tight, exact, transit of Saturn (a square in both cases)? Maybe that is a comfort to all of those who deal with Saturn soon and fear this transit: sometimes Saturn comes to award you.

Saturn is a symbol, not a person. Of course Saturn himself doesn't exist as a person, just like Santa Claus doesn't. The position of Saturn in the sky simply goes together with experiences on earth. Santa Claus is a symbol, too. In my country the symbol of Sinterklaas is the severe edition of Santa Claus. And I think Saturn and Sinterklaas have much in common. He gives presents, but only if you do well (and he takes notes of that!:). And when you are 'bad' you will be punished.

Of course, a chart doesn't judge and neither do transits. Those transits were 'planned' even before a person could act or not. They just happen. So it truly depends on your situation, condition, age and status, and of your own free will to use every opportunity you got (!) if Saturn will award you - finally, at last - or if Saturn will 'drop you' - in the end-. And when you had a bad start with a difficult chart, you have to work twice as hard to, because Saturn gives more present to those who are already rich, just like Sinterklaas drops the most precious toys in the chimney of the wealthy. Perhaps you worked hard to care for your old neighbour, but there will never be a message in the worldwide web. In that case, the award will be the gratitude of the neighbour, perhaps. This, to avoid high expectations:)

You don't expect to be praised at all, with transit Saturn square Sun, do you? But this actualy happened to Kirk Douglas, 91 years old. Fellow artists mentioned that he raised 400 play grounds at his costs and the world wide web spread the good words. Another person who was praised with a tight square of Saturn (with the progressed MC in this case) is the Dutch TV-personality Paul de Leeuw. He was awarded the 'Televizier ring' yesterday. It might be that they have a problem at the same time (I don't know), but the fact that the transit was tight and exact tells me that this transit means 'being awarded', being 'respected'.

SATURN-URANUS: SUDDEN FAREWELL's
Aspects with Saturn, however, don't seem to be fortunate in the life of Kirk Douglas. His Saturn is angular and seems to be crucial in his life. There were several hard and nasty events. He experienced a severe accident and he lost one of his sons later. That was on July 6, 2004, with transit Saturn exactly inconjunct Uranus and inconjunct Sun; Saturn was the apex of a yod made by transit and pointed at separation and sudden farewells.
He also suffers from the effect of a stroke (since 1996 with the progressed conjunction of Sun and Mars).

Soon transit Saturn will be opposition progressed Sun and inconjunct progressed Midheaven, with transit Uranus following in Saturn's footsteps, and these transits will be repeated in 2009. Life is not always easy at age 92...

AN ARTIST's CHART
Kirk Douglas was born December 9, 1916 at 10h15 EST in Amsterdam NY.
Kirk Douglas has an artist's chart. Just look at the calling Neptune (not making major aspects in sign or orb 5 degrees) and at Venus on top! See Jupiter on a crucial spot way down in the chart and you see the combination of a man who will have success in art and will be celebrated (Venus/Jupiter) in the world of the movies (Neptune). 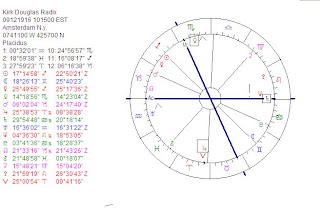