CHARTS OF GUILLAUME DEPARDIEU AND HIS FATHER GERARD

Actor Guillaume Depardieu, son of the French actor Gerard Depardieu, died yesterday. He had pneumonia. Guillaume (French for William) was an actor, just like his father. He was in Rumania making a movie and was transferred to France, but it was too late and the doctors couldn't help him.

GUILLAUME DEPARDIEU
Guillaume was born April 7, 1971 and has a daughter. Guillaume used to have a wild life, crashed with his motor bike in 1996, the same year that he won a Cesar as most promising young actor. That year his progressed Sun was inconjunct Uranus and I think that is perfectly drawing the picture of a rebel without a cause. Due to the accident (part of) his leg was amputated in 2003, after years of surgery, alcohol, and drugs. In 2003 he also broke up with his father. 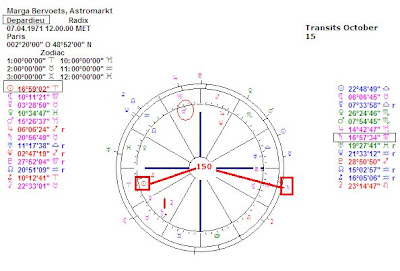 These are the positions on his day of birth. Mars is oriental, Saturn is calling and so is Mercury. If you are interested in combinations of planets, read the footnote 1)

DEATH OF GUILLAUME
He died when the transit Sun was inconjunct Saturn and transit Saturn was inconjunct his Natal Sun. That is a double statement for a bad day and bad health. The inconjunction shows the risk of losing your life. Also there is transit Mars square progressed Mars (fever or infection). Mars is disposing of his natal Sun and Mars is the oriental planet in his chart.
On his dying day, the most important planets at birth were 'hit' by the dangerous combination of Mars and Saturn (limiting energy). In his chart Saturn is 'calling' (not making Ptolemaic aspects).

MISCOMMUNICATIONS
He also had an unaspected (calling) Mercury in his natal chart. Mercury is the planet of transportations and communication. Mercury is inconjunct Neptune. And that is the aspect that he shares with his father. It may be a good aspect for actors, but in real life it easily leads to miscommunications*).

FATHER AND SON
Father and son did not get along very well. The aspects between the charts show us a lot of difficulties. There is an intense and difficult interaction with the positions in his father's chart (Sun-Neptune, Mars-Neptune and Jupiter-Saturn and Pluto-Uranus etc.). And there is the issue of how to be a father (or a son): Sun-Saturn.

Saturn in a chart symbolizes the parent or you as a parent. Saturn is important in the chart of Guillaume, Saturn is calling. With that parenthood, responsibilities and barriers are 'calling'. The Saturn of Guillaume is sesquisquare the natal Sun of Gerard, who has Sun tightly trine Saturn. Today, in his father's chart, we see the progressed Sun opposition Saturn. Is a trine harmonious? I wonder. A trine in a natal chart is an opposition in the progressed chart one day. And progressed Sun opposition Saturn means that the disadvantages of life will be highlighted. It is very hard to survive a child, whatever relationship there may have been.

What we see is that father and son share an aspect that might cause miscommunications (Mercury-Neptune) and is also pointing at the ability faking facts (like actors do). They also share the issue of the life as a parent or with a parent.

CHART OF GERARD DEPARDIEU
Gerard Depardieu was born 27th December 1948 at 8:00 a.m. in Chateauroux. This is his natal chart. 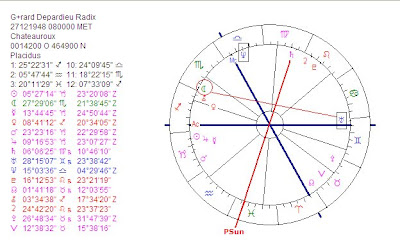 Notice Neptune on top and Uranus angular (on the descendant) and calling (no major aspects!) with the Moon in Scorpio, ruler of the 8th equal house, oriental and you get the picture of a disastrous family life. Gerard left school at age 12 and also left his parental home to start living in an environment of prostitutes. It seems family life does not become the Depardieus.

Sun trine Saturn, Mercury inconjunct Neptune and Jupiter biquintile Pluto are the tightest aspects. The aspects point at the importance of the life of a parent, communicating fantasies or illusions and earning a lot the creative way. But the tightest aspect is between the prominent Moon inconjunct the most prominent planet: Uranus. This aspect tells us about a strong desire to be independent and different from the rest. And that there is an unbalanced need for freedom. It seems to be important in his life.

I think the actor in the chart of Gerard Depardieu is in Neptune (art, imagination and empathy) on top, in the oriental Moon (to 'pretend' and 'imitate' and to keep memories alive or educate). The Moon is conjunct the midpoint Jupiter/Neptune, the midpoint of success in the immaterial field.

ACCIDENT AND MARS-URANUS
Guillaume Depardieu had Mars square Uranus in his chart. In the year 1996 his progressed Mars changed sign to Aquarius.

*) Neptune makes communications (Mercury) misty. See the article on my site Astromarkt for more examples: http://www.astromarkt.net/artmercury.htm
1)Mars/Saturn = Mercury can be read in various ways. For example: death at young age, transportation or lungs killing you, severe infection of lungs, etc. And we read discussions (Mercury/Mars) with a parent (Saturn) or hard -Saturn - and hurtful - Mars - words - Mercury-.