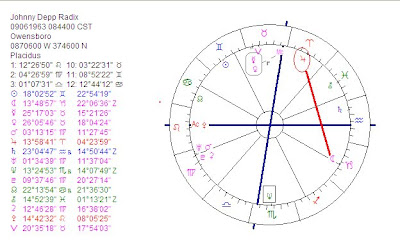 Did you happen to see the most beautiful man in the world? It is Johnny Depp, born June 9, 1963, 8h44 CST Owensboro KY, according to the readers of the British Cosmopolitan. The pirate was born with Jupiter oriental, the Sun without Ptolemaic aspects within 5d of orb, and Neptune square Ascendant. That is a sort of a guarantee for success when you are in the movies. Why? Because, when an important planet rises before the Sun, this planet is prominent. And the placement square the ASC is a crucial placement in the chart. The Sun making no aspects is a 'calling' Sun and the Sun is a star* (he had a vocation to be a star). Jupiter = success and Neptune = movies. Jupiter is inconjunct Neptune. Jupiter is ruler 5 = play, games and show. Neptune = ruler 8 = sex, power, money and influence. Jupiter + Neptune = the issue of the devoted public (in the movies, or in religion or we talk about: fans and believers)...A successful (Jupiter) movie (Neptune) star (Sun). Sometimes astrology is easy!:)

And BTW: Jupiter and Neptune are linked to the Moon and the Ascendant.

COOL CAPRICORN AND SATURN
In the charts of good looking males, Saturn or Capricorn is important always. Depp has Moon in Capricorn and Venus square Saturn makes him just about 'cool' enough. And there is the 'calling' Sun for drawing attention.

MORE...
Venus rules the Midheaven and is conjunct Mercury: a talent for communicating! The tightest aspect is Moon square Jupiter: the need for success, growth and support. Well, the Cosmopolitan ladies support him! Of course they do. He has Jupiter trine Ascendant and that is a fortunate position. It sure helps to present yourself the best possible way. And shall we say that Mars trine MC is for sexy?

I wrote about Depp before (see the files of Astromarkt):

12th January 2007
KEITH RICHARDS/JOHNNY DEPP
Keith Richards will be part of the cast of the 3rd volume of Pirates of the Caribbean. Johnny Depp (born 9th June 1963 at 8:44 in Owensboro, KY, USA) once said that he was inspired by Keith Richards for the way he acted as Captain Jack Sparrow. Pluto of Johnny Depp is EXACTLY on the MC (= imago) of Keith Richards and Pluto is among other things: the planet of influence.

But there is another remarkable connection between the two. Johnny Depp was born with Neptune right on the lowest spot in the charts (and that is a prominent place). Jupiter is oriental. The combination of Jupiter and Neptune prominent is indicative for (for example) actors.

Keith Richards (18th December 1943 at about 6 in Dartford, UK) has Jupiter on top and Neptune is oriental (sort of a reverse of Depp!). Now that he finally can be and actor Keith has both Mars and Pluto trine Jupiter (a combination of success).

For music we see in the chart of Richards: Venus and Uranus both in aspect with the MC. And as astrologers we are immediately struck by the combination of Moon, Jupiter and Pluto on top: indication for an enormous popularity!