When he was proclaimed dead I wrote about Steve Fossett's progressed chart. Now that his plane has been found, let us have a look at his natal chart. 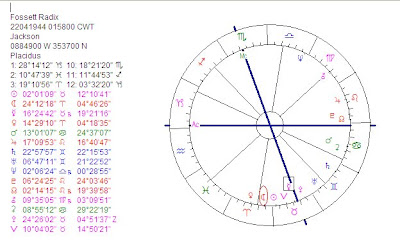 It is the chart of a traveller. There is a very tight connection of the angular Mercury*), semi square Zero Aries, opposition and Jupiter square MC together with Mercury square Jupiter as the tightest Ptolemaic aspect in this chart. Notice that his Midheaven (MC) is conjunct North Scale (19th of Scorpio) and that the North Scale is supposed to have a Mercury-Jupiter influence. Mercury and Jupiter dispose of the natural 3rd and 9th house/section. Those sections are related to travelling.


SUN INCONJUNCT NEPTUNE: MYSTERY
The tightest aspect is of course Sun inconjunct Neptune. In the earlier post about Fossett I referred to the charts of missing people and their family, because Sun-Neptune aspect seem to be of influence when mystery is related to a person's life.

MONEY AND ENTERPRISE
But remember, that he could only travel because he had speculated on the financial market and became rich. Sun in Taurus quindecile the Midheaven in Scorpio could be an indication for the financial market. The oriental Moon in the 3rd house and square the Ascendant makes us aware of the need to be an active person using energy and ...the need to be a prominent number 1, even stronger because of the mutual reception of Moon and Mars.

MARS, SATURN, PLUTO: THEME OF VIOLENT DEATH
Mars, Saturn and Pluto in their combination make us aware of the theme of unnatural death. Mars in this chart is positioned between Saturn and Pluto and all three of them are linked to the Sun (quintile, septile and square). Saturn disposes of the ASC, Pluto of the Midheaven. In the progressed chart Mars disposes of the ASC and Saturn of the Midheaven.