PLAYBOY HUGH HEFNER AND HIS CHART

In the middle of the global financial crisis I read an 'important' message: Hugh Hefner and playmate Holly Madison have separated. The 28-year old was one of the 3 steady partners of the Playboy Icon of 82. Interesting, is not it? An 82-year old surrounded by playmates. Let us have a look at his chart, just to stop thinking about funds, shares and bankruptcy. It is fun, because there is no astrological sign of any grieve or loneliness related to the separation. What astrological signs do I see? In short, his Astro I.D. shows misbalanced use of power and money, and shocking messages about sexuality. And... a successful playboy:) Follow the track in the chart below: 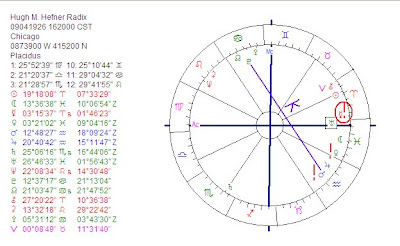 LIBERTARIAN COMMUNICATOR
The rebellious Uranus is prominent in his chart. Uranus is angular, so Uranus is of crucial importance. Uranus is square the Midheaven and related to the very important and personal midpoint ASC/MC. Scandals, shock and 'news' are related to his position in society. He is definitely controversial and a person who changes the world and a political libertarian (Uranus).

Mercury, the planet of communications, is 'calling'. The fact that Mercury does not make major aspects in sign or orb 5 degrees and rises before the Sun makes Mercury the oriental planet in this chart. Writing, speaking: it all becomes him.

A CALLING PASSION
Mars is the end dispositor of the Midheaven and Mars rules the 8th house of influence, sexuality and gain. Mars is ruled by the important Uranus. And Mars is 'calling', too.
And does it surprise you that Venus is 'calling' as well?

CONCLUSION...
With the prominent Venus,Mars, Mercury and Uranus we have the prophile of a person with a prominent passion (Venus and Mars) for controversial (Uranus) communications (Mercury) or for shocking messages about sexuality (Venus and Mars).

WOMEN, RELATIONSHIPS AND MORE WOMEN: WHY?
A person with Uranus on the descendant is an independent and free person. Hugh Hefner does not really need a partner. With Mercury in the 7th house young partners are his choice. And Sun in Aries in the 7th shows us that in any cooperation or partnership he will be King Number One. There is no need to have pity on the man without a long-lasting love in his life. But...with Mercury ruler 1 and 10 in 7 he will always enjoy company. That explains the 3 partners!:)
Do you mind if I end with Mars and Jupiter in the 5th house of pleasures for the play(5)boy(Mars) who is successful (Jupiter) in his games?

There is only one serious affliction that can be related to not being married or being divorced: Mars semi square Uranus is one of the aspects that don't have a good influence on relationships. The fact that he is already 82 seems to be the proof that virgins keep you young.

Pisces (the sign of his Moon and Venus) is the romantic sign, the sign of photography and the sign of addictions. In Western countries it is not uncommon for rich men to have younger women, but certainly not 3 at the time. So why so many? Why this concentration on sex?
Because Pluto is on top of this chart for money, influence, power and sex above all. And Pluto is connected to Mars in the tightest aspect of this chart!

MARS INCONJUNCT PLUTO
Now we get at a minor aspect, but the most tightest aspect in his chart: Mars inconjunct Pluto. A misbalanced (inconjunct) use (Mars) or abuse (Mars) of Pluto-matters like money, power, influence, politics, and potency or sexuality. I read that his first wife permitted Hefner to see other women out of a sort of a feeling of guilt, because she had an affair before they got married. And it seems that he did not let that opportunity to take revange, pass bye...

RELATED ARTICLES
About Mars in aspect with Pluto
Read about Casanova, who also had Mars connected to Pluto (by biquintile)
Geplaatst door Astromarkt op 10:08 PM