Milan Kundera, the famous writer of 'The unbearable lightness of being', has been accused today of denouncing a fellow student to the communist secret police in 1950. The student is said to have been a western agent. Later, in the 80’s, Kundera critisized the communist government. His books were not allowed by the censor. The issue of limitations in freedom of speech is prominent in his chart. And he had a strong vocation for writing and communicating*). Today there is a lot of stress coming from Pluto, the planet of politics, opposition his progressed Sun... 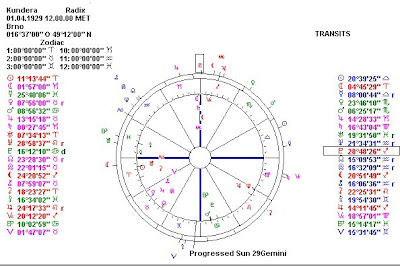 PLUTO TRANSIT
Kundera was born April 1, 1929 in Brnö. I don't know at what hour. All I know is that today transit Pluto is opposition his progressed Sun. This means that he may be forced to face a challenge. Astrology-X-Files mentions 'you may have to defend yourself'. Power struggles and fundamental changes are mentioned all over the internet. I think that a transit of Pluto intensifies living dangerously: Pluto means stress.
Those stressful conditions might activate the natal aspect of Sun square Pluto.

WRITER: MERCURY AND AIR CALLING!
Where is the writer in the positions of April 1, 1929?
Answer: there are no placements in air signs! Mercury does not make aspects in sign or orb 5 degrees, so Mercury is 'calling'! Look at the article on my site Astromarkt (see link below). No aspects with Mercury or no placements in air signs (Gemini, Libra and Aquarius) means a focus on contacts and seeking ways to communicate (= speaking and writing). And Milan Kundera has both (no aspects with Mercury and no placements in air).
Of course there are more clues and if we knew his hour of birth, we might find others.

URANUS AND SATURN
Uranus rises before the Sun on April 1, 1929. Kundera is a reformer, someone special, a rebel perhaps. I have seen Uranus oriental in the charts of those who became very old, so that they had more 'orientation on a future' than others might have.
Saturn is square Aries Point on April 1, 1929 and strong in Capricorn.
Saturn might be conjunct the Moon, but that is not certain.
We see the combination of limited freedom. With Mercury, Saturn and Uranus prominent, the combination of limitations in the freedom of communicating is highlighted.
In 1950 that combination was activated by transit.

And what made him denounce a co-student (who was arrested and spent 14 years of his life in prison)? In 1950 his Sun had changed sign (I think because of the life as a student in another town). Progressed Venus was trine Neptune for unlimited sympathies and romantic love. Who knows? And transit Uranus was opposition his prominent Saturn in that year. Here we get a key! It means that there was an issue of limited freedom**) in that year that became important. And this issue was already highlighted in the natal chart!

2008
Pluto is the planet of diving deep. In case of illnesses Pluto is the surgeon who cuts away what is no longer needed or what is dangerous for your health. But sometimes Pluto means trouble, a problem to be solved, politics making life difficult and a lot of stress. Kundera's progressed Sun (29th of Gemini) will change sign again. He is in a period of transformation. Pluto adds problems and challenges. Within 2 years his progressed Sun will be opposition Saturn and the quality of life might be less than it is now.

MASTERPIECE
The movie based on the book is a masterpiece and so it the book. He wrote it in 1982 and it was published in 1984 with progressed Moon trine Jupiter (the best progressed aspect one can get), right after Moon trine Venus.

PS in 1975 he fled to the West with progressed Moon trine Jupiter and transit Jupiter conjunct the natal Sun.

RELATED:
Conspicuous by absense, article about missing elements and unaspected planets on my site Astromarkt

*)Passing through messages is part of the job of Mercury (prominent in Kundera's chart). Read how important Mercury is f.ex. in the chart of Archbishop Wielgus, the man who worked as a spy for the communist...Just like Kundera he had Mercury calling and a prominent Saturn. Maybe that Saturn indicates fear...

**)Tady maji nezvratny dukaz, ze to Kundera udelal, that is what I read on the internet. As an astrologer, however, I am not able to make judgements. Sometimes even criminals, detectives and judges seem to share the same kind of aspects (ast they share the same issue in life: crime). I only show you the astrological picture!

More insight might be offered by this interesting site with information about the subject:
http://english.respekt.cz/Milan-Kunderas-denunciation-2742.html

PS October 14: Milan Kundera denies the story. The investigator, Adam Hradilek, claims to have a police report of the denounciation dated March 14, 1950, with name and date of birth of Kundera. Read the story in the Times.